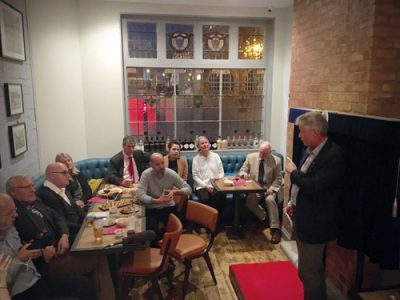 On Monday 16 October 2017, the Pig & Tail Public House in the Jewellery Quarter, hosted the unveiling of its Renaissance Award

The Pig & Tail competed against some strong competition, which included The Birmingham Assay Office and Gas Retort.

“This ceremony marks the rescue and transformation of a piece of Jewellery Quarter history – the old George & Dragon boozer – into the Pig & Tail Public House. Internally it is much changed, but in finding a new use as an attractive bar with flats above, the owners and City planners have brought new life to a once decaying 19th century building and brought it to life for residents and visitors to enjoy.”

Kartar Consulting have had the privilege of overseeing the project by providing Quantity Surveyor and Project Management services.

For Gurbinder Sandhu, Kartar Consulting Director, the former George and Dragon project is more than just an ordinary project: “Taking on a project like this not just helping to improve local area but also it helps to expose city heritage. We are really honoured that the Pig & Tail has been awarded with such a prestigious prize, as we put lots of passion and effort to make sure that this venue will once again look like it did in its glorious times.”

Editor’s note: The original ‘George & Dragon’ sign is still visible on the building and this is the pub which Kathleen Dayus’ books made famous. It is where as a child she used to sing outside and beg for pennies to help feed herself and her siblings in the early 1900’s. A monument to her stands in the Dayus Square.