St Paul’s Church in the JQ 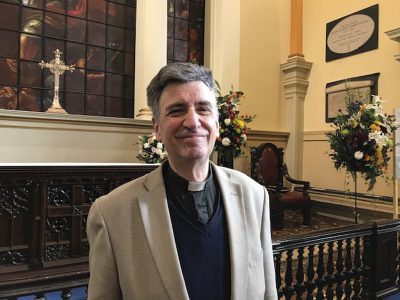 ‘I arrived at St Paul’s 20 months ago. It has been a privilege to be part of the JQ and its vibrant community. I have come to realise that St Paul’s is at the heart of the Jewellery Quarter and one of the most iconic buildings in Birmingham.

This Eighteenth Century masterpiece, with a seating capacity of 400 people and the finest acoustic in the Midlands is, with its huge churchyard, one of the most beautiful locations in Birmingham. At the heart of St Pauls is our weekly worship with a growing international worshipping community.
St Pauls is a very popular venue for baptisms and weddings and many special services. St Pauls also provides a meeting place for the JQ Residents meetings, the Persian Bible study Group, St Mary’s Hospice, Birmingham schools and many other organisations.

Our events calendar is growing rapidly. We already have some of the most exciting classical music in Birmingham performed by Ex Cathedra, Birmingham Bach Choir, Vivat, Notorious, the Birmingham Gay Symphony Orchestra the Midlands Chamber Orchestra, and many students from the Royal Birmingham Conservatoire with whom we have a close connection.

We are increasing our music profile with some of the biggest folk and contemporary music acts in the country in including members of the bands Japan and Tangerine Dream and Badly Drawn Boy. In the folk world we have enjoyed the Unthanks and Johnny Flynn.

We have participated in the JQ Festival and Birmingham Jazz Festival and want to develop our capacity for theatre and the performing arts. We are now receiving requests for use of the churchyard in the summer months and Christmas time for music, food fairs and exhibitions.

Above all, St Pauls is a space for everybody regardless of their belief or background. We are hoping to open the church every day to become one of the community hubs in the JQ.

This jewel of a Church is one of the most iconic buildings in Birmingham. However, its fabric having survived the industrial Revolution and World War two bombs is now very brittle.

The guttering is worn out and we have recently had substantial ingresses of water this very wet summer which has badly damaged the ceilings, walls, and carpets.

Our Architect has warned us that severe damage will be caused if the problem is not tackled soon. If the ceilings collapse, the building will not be able to function and the JQ will have lost one of the most historic and important buildings in Birmingham. So far, the JQ have responded magnificently.
In mid-September there was two-day fundraising event which raised nearly £5000 and as importantly, raised awareness of St Paul’s situation.
But there is some way to go. We have to raise £40000 to make the building watertight to prevent further damage. If this is achieved, we can then look to the future to plan how to transform the building into the hub of the JQ.

You are always welcome at St Paul’s. If you have not visited, please do so and keep an eye on our worship and events calendar.

Special Note:
I will be very pleased to visit or meet anybody that wishes to know more about St. Paul’s Church and ways in which they can contribute to the repair to our gutters.’