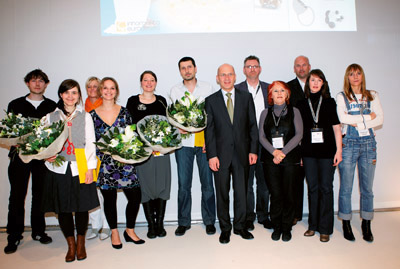 At inhorgenta europe 2010 creative jewellery design was honoured with the Innovation Award for the 11th time.

The award, endowed with a 2,000 Euro prize, has established itself as one of the most important international jewellery design awards.

The Innovation Award enjoys a very good global reputation in the industry and has become the perfect stepping stone into the international jewellery market for young designers.

This explains its popularity: This year more than 160 designers from all over the world entered their pieces in the competition.

An international jury, this year consisting of six experts from five different countries, selected the winners. Four competitors from the ‘Modern Jewellery Design’ segment, and one designer each from the segment ‘Silver Objects’ and ‘Platinum Jewellery Design’, were honoured. The winners received their awards at a presentation ceremony at inhorgenta europe.

The following entries were honoured with the Innovation Award, thanks to their trend­setting jewellery design: Birgit Hagmann from Kaufbeuren impressed the jury with her imaginative three-dimensional brooches, inspired by nature.

Düsseldorf resident Julia Funk received the award for her original ‘Calf Jewellery’, slightly reminiscent of 1920s era sock garters. In addition, the jury enthusiastically agreed on the ‘collapsible’ bracelet and necklace by Kirsten Plank from Plattling, turning jewellery wearing into a small ceremony.

Last, but not least, Polish jewellery designer Arkadiusz Wolski impressed the jury; his surrealistic ‘Pictograms’ are meant to be ironic, yet decorative statements. The Special Silver Award was presented to Stefan Strube from Hannover for his drinking vessels, which surprised the jury with their harmonious symbiosis created with the materials silver and concrete.

The Special Platinum Award went to Düsseldorf resident Nina Friesleben for her very elegant, yet despite their material surprisingly airy platinum rings and bracelets.

“The endorsement of innovation power and creativity in the jewellery business is the central goal of our trade fair,” emphasizes Armin Wittmann, inhorgenta Europe Exhibition Director.

“We consistently focus on supporting talented jewellery designers. The Innovations Award embodies the high design competence of the trade fair and is the perfect complement for the concept of hall C2.”

For this reason inhorgenta europe has established itself as the leading international jewellery design show, and is the world’s only platform for designer jewellery in all its facets. The next issue of the EU’s largest trade fair for watches, jewellery, gemstones, pearls, and technology will be held from February 25th to 28th, 2011.