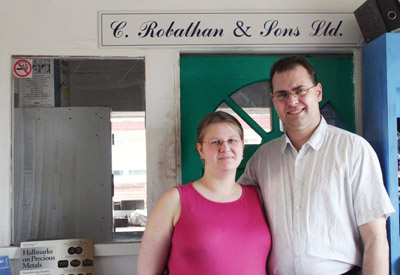 C Robathan & Sons, the Birmingham based silverware manufacturer, has plenty to celebrate as they reach an important anniversary in 2008 – 90 years in business!

Established in 1918, the company was founded by Charles Robathan in a small garden shed. Since then, the company has been proudly passed down four generations from father to son.

The company, which operates from premises in Hockley Vale on the fringe of the Jewellery Quarter, manufactures a wide range of sterling silver souvenir spoons for all occasions. The product range also includes condiment spoons, butter knives, child sets, decanter labels and cufflinks.

Managing Director, Craig Robathan said: “The business has had a long association with Birmingham and has been manufacturing articles in silver and plateware for 9 decades in this City. We pride ourselves on offering a high quality and well designed product range at competitive prices. We look forward to continuing the high quality service we offer our customers and we look to the future with positive optimism.”

C Robathan has recently been commissioned by The Birmingham Assay Office to produce a limited edition collection of silver spoons.

From The Birmingham Assay Office Archives…
‘The Robathan family certainly have a long-standing connection with the trade and the Jewellery Quarter. The Birmingham Assay Office holds records of each sponsor’s mark that has been registered since the Office was established in 1773, and the registers show that John Benjamin Robathan was the first in the family to register his mark on 11th January 1871.

Last but not least is Charles Robathan, great grandfather of the present Managing Director of the business, Craig Robathan. Charles’ trade is recorded as spoon and fork maker. He registered his mark on 13th September 1926 and then again on 22nd December 1936. The letter from William Robathan, a partner, asking if the signature of his brother R.O. Robathan can be accepted by The Birmingham Assay Office as authorisation’.