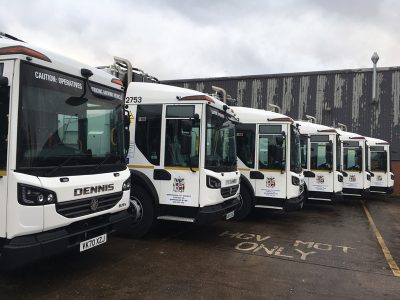 On 3 December 2020 it was announced that the first of 76 new waste and recycling vehicles have started to roll out on the streets of Birmingham as part of the drive for improved bin collection reliability in the city.

The vehicles have been supplied to the city council by West Midlands-based Dennis Eagle and represent an £11 million investment into Birmingham’s waste collection service.

Their arrival in the city heralds the start of the rolling replacement of a fleet that was last upgraded in 2014 and will see the remainder of the service’s vehicles refreshed by 2024.

All the new vehicles will be compliant with the city’s Clean Air Zone, which is set to be introduced from June 2021.
Cllr John O’Shea, Cabinet Member for Street Scene and Parks at Birmingham City Council, said: “Our hardworking crews do a great job as part of our effort to keep the streets of Birmingham clean.

But they need the best tools possible in order to do this – the refresh of our fleet is long-awaited and will help improve the reliability of the collection rounds, reducing our dependency on hire vehicles to shore up the service. 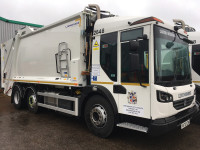 Just as importantly, these are vehicles made right here in the Midlands. They are cleaner and greener and will improve our wider environmental ambitions related to air quality and carbon emissions.”

Dennis Eagle’s Sales & Marketing Manager Lee Rowland said: “It’s great to be supporting an operator right on our own doorstep, in a place where many of our own staff live.”

These 76 new vehicles will, in an average year: