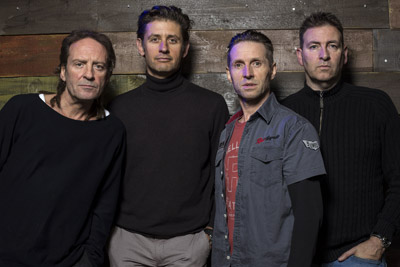 British alternative rock band and 90’s indie-starlets, Jesus Jones, will be headlining at The Jam House on 15 June. The band will be celebrating their thirty-year career with their bouncy indie-electronica that produced a string of UK hits including ‘Info Freako’, ‘Real Real Real’, ‘International Bright Young Thing’ and their US number one ‘Right Here, Right Now’, which is based around the swift ending of the Cold War.

Jesus Jones’ tracks are inspired by electronic, house and techno styles, mixed with classic indie rock and since their debut in the late 1980’s, they soon became one of the leading artistes of the early 1990s alternative dance scene.

John Bunce, General Manager at The Jam House comments: “Well, I’m really looking forward to this show. As a night club manager in the ’90s, I was immediately taken by the band Jesus Jones, and how their tracks could create immediate excitement on the dance floor. A band of their time with synthesisers and drum machines, they fused an acid-house groove with a more traditional rock guitar and heavy bass playing. Great songs too – proper anthems.”

The critically acclaimed band have continued performing live since the mid-2000s and are set to release a new album this year titled ‘Passages’ which is a collection of songs about the passages of time and journeys travelled and sees the band reflecting on what it actually feels like to still be performing after so many years. The album is their first collection of new material since the release of ‘London’ over 15 years ago.

Mike Edwards, Band Member of Jesus Jones, comments: “We may have formed in the West Country, and learned our craft in small venues around London, but Jesus Jones first really took off thanks to our fans in the Midlands. Our first shows away from our London home were up here – and we played some great gigs, at some truly iconic venues. The audiences in the Midlands took us to their hearts, and made us feel loved. Ever since, it’s been a real pleasure to return! We can’t wait to appear at the Jam House!”