Home » UK Trade News » A Brooch fit for a Queen 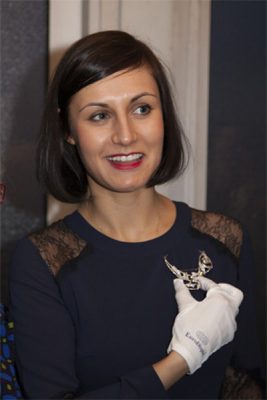 The Birmingham Assay Office is privileged to have been involved in an industry wide collaboration to produce a brooch fit for a Queen. Members of The British Jewellers’ Association, the national trade body which represents the UK’s jewellery sector, created a spectacular platinum, gold and diamond brooch which was given to Her Majesty the Queen on 5th December 2012 in celebration of her Diamond Jubilee Year.

The Birmingham Assay Office contributed by assaying each of the precious metal components, including rare Scottish, Welsh, Irish and English Gold, and carefully applying the hallmarks to the final piece.

The design for the brooch was chosen by a panel of industry experts following a national competition open to all UK based jewellery designers.

The winner was Ivonna Poplanska, a student at The Goldsmiths’ Centre in Clerkenwell, London.challenge and laser marking technology came into its own, allowing the hallmarks to be positioned with precision without damaging the superb craftsmanship.

Chief Executive of The Birmingham Assay Office, Michael Allchin said “The brooch represents the best of our industry; superb traditional craftsmanship combined with innovative technology, imagination and flair and most of all a generous spirit of co-operation which has created a wonderful piece of which we can all be proud.”

Poplanska (26) who is originally from Latvia, came to England in 2005 to study for a BA in Silversmithing, Goldsmithing, and Jewellery Design at the University for the Creative Arts in Rochester. She was then chosen as one of the first intake of Post Graduate students at The Goldsmiths’ Centre where she has been studying painting and drawing, 3D model making and CAD.

Her design entitled ‘The Eternal Dove’ is loosely based on the ‘Sceptre with Dove’ an item in the Crown Jewels which, was made for the Coronation of King Charles 11 in 1661.

The dove, which is in flight, encompasses four flowers –the shamrock, the daffodil, the thistle, and the rose – chosen to represent the countries of the United Kingdom.

These are made in rare Irish, Welsh, Scottish, and English gold which have been donated by enthusiastic local prospectors. Natural coloured diamonds have been used to highlight these flowers. Entwined holly leaves also feature in the design symbolising unity, while the dove stands for peace. 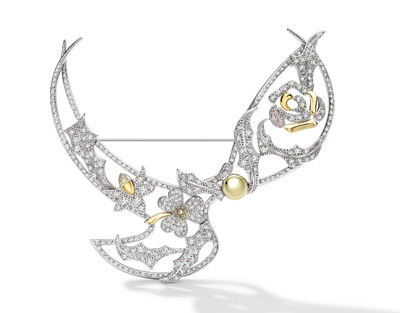 “Al l the precious metal and gemstones used in the brooch were donated to The BJA and our members also gave generously of their skills and production expertise to create it in Birmingham’s Jewellery Quarter.

The production utilised the very latest technologies, provided through Weston Beamor, and married them with traditional, hand skills from Ian Hall at Lasting Impressions.

The finished piece is a tremendous testament to the high levels of craftsmanship that exists amongst members of The British Jewellers’ Association,” says the BJA’s chief executive Simon Rainer.

“Jewellery has always been associated with royalty and we felt it fitting that The BJA, which this year celebrates the 125th Anniversary of its founding, should celebrate this special year by creating this exquisite, commemorative brooch which will hopefully carve its own niche in history,” says Lindsey Straughton the BJA’s Marketing and PR Manager.