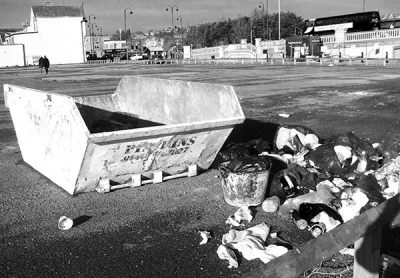 Vittoria Street Gallery is delighted to host A Waste Land, a joint exhibition created by jewellery artists Dan Russell and Dauvit Alexander on show during February 2019.

This exhibition sets out to question and challenge the illegal dumping of consumer waste. These jewellery artists have united together to raise awareness of this environmental concern and in response have created jewellery from the things that everyone else pretends not to see: the detritus of the Anthropocene.

Litter, fly-tipping, discards, waste, garbage, rubbish. Collecting this unpromising material, they have produced a thought-provoking collection of jewellery and wearable objects which will be displayed in an uncompromising environment, entirely built from the illegal discards of others. 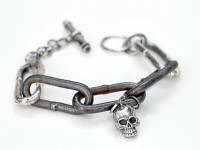 Run of the Mill by Dauvit Alexander

Hailing from either end of the country, the pair aim to criticize the habits of a nation examining why this isn’t a localized problem contained within their individual surroundings, but instead a global dilemma with catastrophe-leading potential.

Working from the concept of future archaeologists mining the accumulated waste as the planet slowly recovers from anthropogenic activity, they have created objects which challenge the idea of what is precious, recontextualising materials and diminishing the attitudes of apathy towards waste.

Inside the Void by Dan Russell

Dauvit Alexander is a jeweller and educator, based in Birmingham at the world-renowned School of Jewellery. For nearly two decades, he has been working with found objects and scrap materials to create jewellery with a political, historical and social narrative, often taking his practice out into the community and working with marginalised groups such as refugees, young offenders and victims of violence.

Dan Russell is a jeweller/maker and gallery assistant based in Kent. A recent Alumni of UCA Rochester, he is known for working primarily with wood and other found objects gathered from his local surroundings to create wearable adornments with a social and environmental narrative. His most recent collection, ‘Waste-Full World’, a project about the impact of plastic waste and its effects on sea-bird and marine life worldwide has since gone on to be exhibited throughout Europe and Asia.

A Waste Land will open at Vittoria Street Gallery in Birmingham’s Jewellery quarter during February and will travel to the award-winning Sun Pier House Gallery in Chatham Kent in March. All the work created will be disposed of ethically and sustainably at the end of the exhibition.