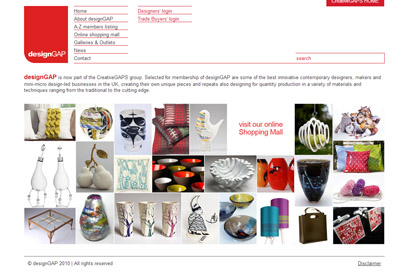 Recognising first hand the many difficulties in surviving as an artist or designer Shirley Frost set up designGAP in 1980 to assist high quality, innovative, contemporary UK artist-makers, and designer-producers with the promotion of their work. Not as an agent but as a catalyst.

The first event was a group stand of 16 including herself at a Trade Fair in 1981 under the umbrella of the Design Council. She still runs designGAP voluntarily as a not for profit venture without government or other grant funding.

Over the years it could well be that a total of about 3,000 have been assisted in one way or another.

Since that successful first show many well established and newly emerging creative’s have shown with her on Trade Show stands of Fashion, Giftware, Jewellery and Interior Accessories in the UK and Overseas and more recently into Retail Exhibitions too. DesignGAP and its exhibitors have won many awards and been featured on television, in numerous newspapers and magazines.

Shirley’s photographic collection of designers’ work has been useful to a number of specialist writers and in the early 1980’s it was the main source for a V&A Museum Collection of Contemporary Fashion Jewellery.

In the mid-1980’s there was a small designGAP shop for fashion accessories in Hyper- Hyper London, which she set up as a Designer Co-operative. Later she opened a designGAP Showroom in Birmingham as a year-long experiment.

Five years of illness in the early 90’s curtailed further developments, but in the spring of 1997 she published her first designGAP TRADE BUYERS’ GUIDE, and since then there have been nine annual bound editions with other years having designGAP DIRECTORY updates.

Additional information is available in the constantly growing website www.designgap.co.uk which also first went online in 1997 also. These two developments together compliment and reinforce the Trade Fair promotions. The website, of course, is available to a far wider audience and has a broad range of information available relating to contemporary craft and design.

DesignGAP celebrated its 25th Birthday in 2005. In May of that year Shirley was presented with the GA’s Honorary Achievement Award for her major contribution to the UK gift industry and in December she received an Honorary Doctorate of Science from the Business School of the University of Birmingham for her innovative work assisting mini-micro creative businesses.

Appreciating that the work of many members also relates to Applied Art, Usable Art and Wearable Art, as well as Painting, Printmaking and Sculpture, Shirley is now setting up ARTgap as a sister organisation run with similar aims, ambitions, and objectives.

While for designGAP there is a continuing Trade Fair presence at major UK venues now with members’ own independent stands on special designGAP aisles or in clusters. Many members also show at Consumer Fairs so there are plans for designGAP/ARTgap areas in some of those.

Shirley is still searching for a permanent administrative home for designGAP where there could be an archive documenting all the projects and past members with full information on current members and if space allows, changing exhibitions could be held to mirror proposed Virtual exhibitions on the website. In the meantime while still running designGAP Shirley is working on the vast amount of archive reference which has accumulated in the office at The Big Peg in Birmingham’s Jewellery Quarter.