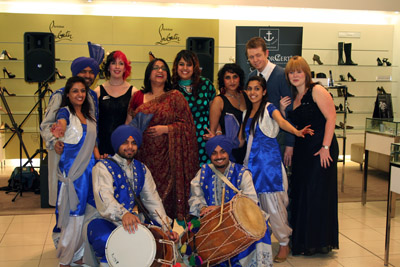 Tempted into the iconic Harvey Nichols store while filming in Birmingham, the celebrities found the AnchorCert party in full swing. They were thrilled to join guests celebrating the first decade of the UK’s premier gemmological service, based in the heart of Birmingham’s Jewellery Quarter.

AnchorCert is the Diamond & Gemstone Certification division of The Birmingham Assay Office providing professional reports and certification services to the jewellery industry and to the consumer.

Its success lies in the skills and dedication of its team of expert gemmologists and support staff who continually strive to offer innovative, and industry leading solutions to the needs of the 21st Century international jewellery industry. This was most recently evidenced by the development of the AnchorCert Gemstone Weight Estimator APP for smart phones and tablets which can in a couple of clicks estimate the weight of any set gemstone from measurements entered.

The APP has been developed in Birmingham and is being downloaded by gemmologists all over the world. 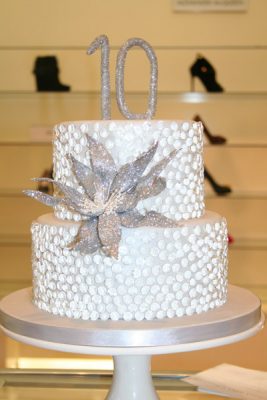 Harvey Nichols Store Manager, Kevin Breese watched on in amazement and later described the scene as ‘surreal’ as Harry Styles, and fellow band members Zain Mailik and Liam Payne from One Direction, along with Corden, the popular Gavin and Stacey star joined the Birmingham based Sansaar Group Dhol drummers and Bhangra dancers and astonished guests with their interpretation of the traditional Punjabi folk dance.

The Assay Office Chairman, Kay Alexander, and Chief Executive Michael Allchin, both wearing grand Chains of Office for the occasion also joined in…

With calm restored the guests, including the Lord Mayor of Birmingham, Councillor Anita Ward, heard about AnchorCert’s success and standing as a highly respected international gemmological service.

Kay Alexander spoke of the many exciting and positive things happening in Birmingham. Michael Allchin reminded guests of the need for gemstone certification and its benefits to both the consumer and the jewellery trade. Designer and Jewellery maker James Newman, explained why he, a Yorkshire man, had chosen to establish his business in Birmingham.

The stars of the evening were however undoubtedly the showcases of fabulous diamond and gem set jewellery made in Birmingham’s Jewellery Quarter and certificated by AnchorCert. James Newman Designs and Victoria James, both based in Vyse Street and Fei Lui based in Newhall Street, along with pieces from Sharman D. Neill based in N. Ireland showcased their world leading and sought after contemporary design collections.

Chief Executive and Assay Master, Michael Allchin, said of the event: “This was a fantastic evening and a fitting tribute to the hard work and achievements of the Anchorcert team. It embraced the culture, creativity, and inspirational thinking that is at the heart of AnchorCert, The Birmingham Assay Office, and the City of Birmingham.”