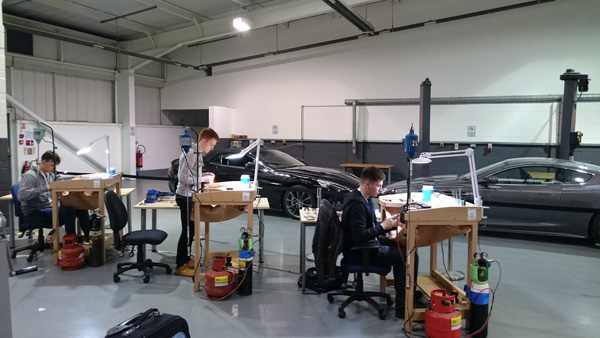 On Friday 8 March 2019, Goldsmiths’ Company Apprentice Sam McMahon employed at Mappin & Webb, was selected to represent the UK at The WorldSkills Finals in Kazan, Russia in August (22/27).

Winning a spot in fine jewellery making, Sam joins more than 30 young professionals from engineering, hospitality, professional services, construction and digital and IT to form the UK team at the upcoming ‘Olympics of Skills’.

To win the spot on the UK team, Sam, currently employed by Mappin & Webb, competed against George Schembri from B&M Bijoux and Robert Dean from The House of Garrard. The three Goldsmiths’ Company apprentices spent three days in Nottingham demonstrating their exceptional technical skills in jewellery making.

Within a temporary workshop and set against a backdrop of Aston Martins in the Business, Digital and Creative zone, the apprentices were set the task to create an Aston Martin badge to a specific design, testing their accuracy, time management and problem-solving skills. Sam McMahon proved his mettle against his fellow competitors taking first place.

Sam McMahon, Goldsmiths’ Company Apprentice at Mappin & Webb, explains: “I am so proud to have made the UK team! It has been a long journey of hard work and commitment – from my time on the Goldsmiths’ Centre’s Foundation Programme to becoming a Goldsmiths’ Company Apprentice at Mappin & Webb – and I would like to thank everyone that has supported me through the last year and a half; my master, workmates, company, friends and of course the skills training team to get me to the WorldSkills final! I look forward to the challenge ahead.”

Peter Taylor, Director of the Goldsmiths’ Centre: “Congratulations to Sam McMahon for his incredible performance at WorldSkills and the best of luck to him in Kazan! He has proven that talent, maturity and preparation are absolutely key to success and we would like to express our thanks to the Goldsmiths’ Company, a long-standing competition organising partner of WorldSkills, his Master at Mappin & Webb and our skills training team at the Goldsmiths’ Centre for their time helping him to prepare for this tough competition.”

WorldSkills, the UK’s largest skills, apprenticeships and careers event, is the ultimate competition for the next generation of skilled professionals – demonstrating their problem-solving skills, time management and ability to deal with the pressure of making in front of a live audience and judging panel on a world stage.