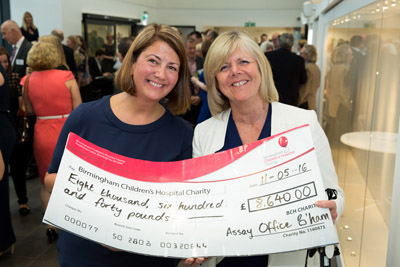 Assay Office Birmingham has raised over £8,600 for Birmingham Children’s Hospital Charity through the building of its new headquarters in the Jewellery Quarter.

Working with local businesses and long-time customers, Assay Office Birmingham launched a ‘sponsored brick’ initiative during the building of its new headquarters, with 12 businesses funding feature bricks to become part of the new building’s exterior. 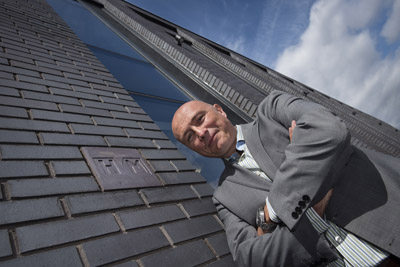 Speaking of the money raised, Paula stated: “We want to say a massive thank you to Assay Office Birmingham for their support in raising this fantastic donation.

This money will make a big difference to our brave children and their families as we continue our plans to improve our facilities – enabling us to treat even more children from Birmingham, the West Midlands and around the country.”

The special feature bricks, which bear the sponsor marks of the donors, as well as other key hallmarking symbols used during the Assay Office’s 242-year history, raised £15,100 in total, which was split between Birmingham Children’s Hospital Charity and the British Jewellery, Giftware and Finishing Federation (BJGF) Benevolent Society, a charity that provides financial assistance for individuals who once worked in the trades represented by the Federation and who, through old age or illness, have fallen on hard times. 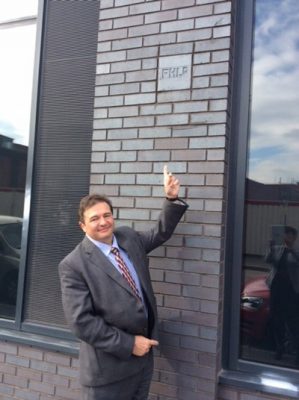 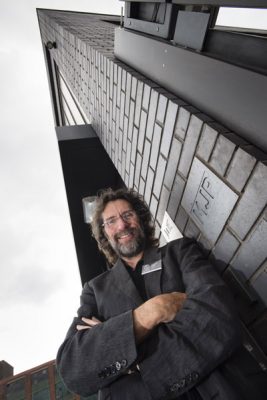 Stella Layton added: “We are very proud of our history and our long-established place in the Birmingham business community.

This new building represents a huge step forward and marks the confidence we have in our future.

We are very pleased that some of our long standing customers will be so clearly represented on the exterior of our new building with the added bonus of raising money for two excellent charities.”

These are a representative sample of businesses that have a long-standing association with Assay Office Birmingham. Among the bricks featured on the exterior of the new AOB building are traditional hallmarking symbols; a lion for Sterling Silver, crown for Gold, orb for Platinum and Pallas Athene for Palladium. The famous Birmingham town mark, the anchor also features prominently.

Sponsor marks registered to the founder of the Assay Office and one of Birmingham’s leading entrepreneurs during the Industrial Revolution, Matthew Boulton, take pride of place beside the front door of the new HQ.