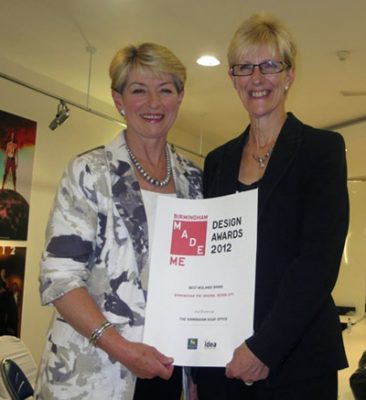 The Awards marked the culmination of the first Birmingham Made Me Design Expo, an integral part of IDEA Birmingham, a massive collaboration spearheaded by Birmingham City University and sponsored by industry giants.

The Design Expo set out a platform for Midlands businesses and organisations small and large, to showcase the range of design and innovation expertise existing across the region and also its prominent cultural heritage.

The shortlist was put to public vote and the top three companies were very close. In the final outcome it was AGA who were the outright winner with Codemasters and The Birmingham Assay Office as runners up.

These awards acknowledge innovation, design and forward thinking and it is gratifying that people recognise The Birmingham Assay Office for these strengths as well as for hallmarking and our wonderful history and heritage.

In the past decade our business has diversified far beyond its statutory duty of hallmarking, and has made significant investment in order to provide innovative services and state of the art testing equipment for metals, gemstones and jewellery whether it be precious or costume. Above all we have a fantastic team of staff whose expertise and commitment have earned us this Award and I am delighted that their efforts have been acknowledged.”

Commenting on The Birmingham Assay Office’s success Michael Allchin, Chief Executive and Assay Master said, “Innovation, Independence, and Integrity are what we have always been about and always will be.

The Birmingham Assay Office has invested heavily in high tech equipment and the highly skilled experts to use it. We would not have survived for over two centuries without continual innovation and in the current difficult trading conditions it is more important than ever. We are delighted and honoured to have been recognized in this way.”