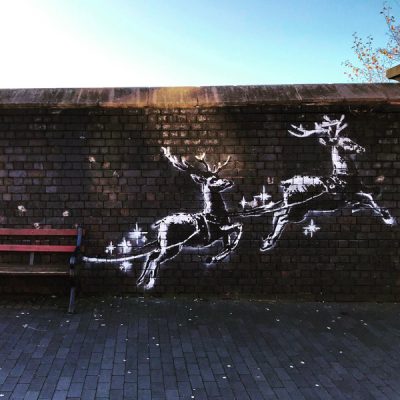 The Perspex screen temporarily protecting Banksy’s newest artwork has sold for £2,300 at Fellows Auctioneers in Birmingham. It was sold to Steve Tolley, co-owner of the Bullion Room, a Birmingham-based premier precious metal and jewellery dealer.

The screen covered Banksy’s art depicting two reindeers flying away from a bench in Birmingham’s Jewellery Quarter – highlighting homelessness. With an estimate if £100 – £150, the Perspex increased in price over an eight-day timed sale, eventually selling for £2,300. The Perspex was placed over the Banksy masterpiece to prevent it from being vandalised, and Fellows Auctioneers put the Perspex up for sale, when a more permanent cover was installed.

All proceeds are going to Midland Langar Seva Society (MLSS), a brilliant organisation set up to help homeless people in need in the UK.
Banksy released an Instagram post in December, which has since had millions of views, revealing his artwork, and highlighting the severe homeless problem in the UK.

The reveal led to international coverage, unfortunately resulting in fellow graffiti artists vandalising the piece. Network Rail took the decision to place a protective Perspex screen over the piece, preventing it from being ruined. Unfortunately, another graffiti artist defaced the protective screen, which was then kept by JQBID, to then be auctioned at Fellows Auctioneers.

The screen itself still contains paint marks from being vandalised and was auctioned alongside the bolts used to place it on Banksy’s artwork. Fellows Auctioneers, who hold weekly auctions in Birmingham’s historic Jewellery Quarter, were thrilled to be auctioning the artwork and to play a small part in helping such a great cause.

Other contributions from local businesses including the auctioneers have increased the total sum raised to £3,300 for Midland Langar Seva Society.

Luke Crane (Executive Director JQBIDS) says: “This piece of art by Banksy was an early Christmas gift – but brings with it a very strong message – a timely reminder that we are facing a nationwide homelessness crisis and we must not forget those in need, especially over the Christmas period. By taking inspiration from the artwork, we have an opportunity here to put the Jewellery Quarter firmly on the map, as the leading light in ending the homelessness crisis that is blighting our inner cities. Money raised through the auctioning of the original Perspex that protected the Banksy mural, will be donated to Midland Langar Seva Society.”

Simon Evans Head of Communications – North West & Central, Network Rail added: “We’re pleased to be able to sell this item, to raise money to help homeless people. Life is strange sometimes. Ordinarily a piece of Perspex is no big deal – but a piece of Perspex that has protected a Banksy – that is a big deal.”