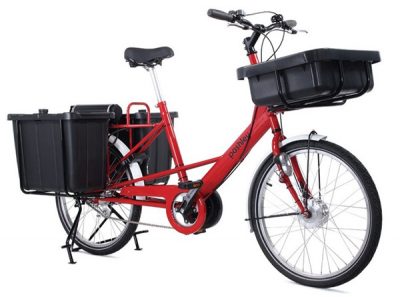 Following a successful bid application, Birmingham City Council has secured £58,000 in government grant funding to run an e-Cargo bike pilot in the city.

It will be one of 18 local authorities to receive funding from the eCargo Bike Grant Fund Scheme, funded by the Department for Transport and delivered by the Energy Saving Trust.

Birmingham City Council, who applied for the funding in March following engagement with Business Improvement Districts, local businesses, and major employers, will purchase 20 e-Cargo vehicles for a pilot scheme.

The pilot will provide a basis for the wider take up of e-Cargo vehicles in Birmingham, as part of a broader plan to support sustainable freight vehicles and practices.

The pilot, due to be rolled-out later this year, will be a long-term lease programme that includes maintenance and training for 13 e-Cargo bikes and 7 e-Cargo trikes.

75% of the new bikes will be loaned to the Council’s local partner organisations, to demonstrate how they might be used to support day-to-day operations and deliver goods and services. They include:

Five of the new bikes will be kept by Birmingham City Council and will replace van trips as part of a move to modernise its transport fleet.
The announcement comes shortly after the launch of Birmingham’s Emergency Transport Plan, which sets out the short, medium, and longer-term actions Birmingham can take to enable a low carbon, clean air recovery from COVID-19.

It prioritises and accelerates some of the measures that were outlined in the draft Birmingham Transport Plan (consulted on earlier this year), to support walking, cycling and public transport across the city.
Birmingham’s e-Cargo bike pilot scheme will run for three years.