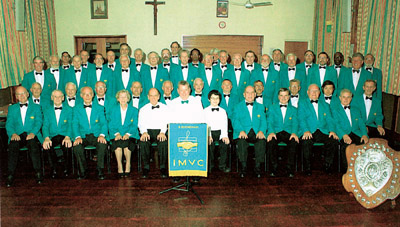 Their Annual Concert is on October 9th at the Birmingham Symphony Hall, to celebrate their 110 yr. Tickets from the box office from May 19th. They have produced a CD this year that will soon be on sale. Price TBA.

On Feb 28th 2007, the choir was awarded by the Lord Mayor of Birmingham a plaque showing the Birmingham coat of arms, the image of which they have permission to use.

On the 28th of June 2008 they hosted a 300 voice mass MVC concert at the Birmingham Town hall and later embarked on a successful tour of Ireland, and this year it will be Scotland.

The choir is always looking for new members and are free most Tuesday evenings, please either come along to rehearsals at the Grimshaw Room behind St Chad’s Cathedral, Shadwell Street at 7.30pm.