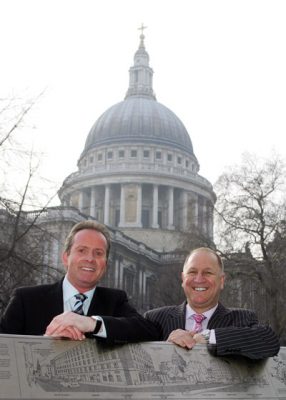 The British Jewellers’ Association has a new Chairman and Vice Chairman to head its National Committee, the elected body of volunteers which advises its management team.

At its Annual General Meeting held on 19 February, 2008 at Goldsmiths’ Hall in London, Barrie Dobson Sales Director of the global jewellery sourcing company IBB was sworn in as Chairman for the next two years.

The fact that Dobson has extensive knowledge of the whole jewellery supply chain and comes from a quite different part of the industry to his predecessor, is something which he sees as one of the great strengths of the Association.

“Over the years the BJA has definitely become much more inclusive and has achieved greater relevance to businesses of all types and sizes from designer makers just entering the industry to major manufacturers, suppliers and retailers,” he says.

Dobson likes to look at the industry like a wheel, with all the various different BJA member companies dotted around on the rim staring across at each other but with no way of moving closer. “Now put the BJA in the hub with spokes reaching out to all parts of the tyre, then some real communication can begin and we can get things really motoring,” he says.

He sees his primary role as drawing attention the wide gamut of business services and useful discounts that the Association provides to its members. “I don’t think that the BJA sings its own praises loudly enough. It does much excellent work to defend the interests of the whole sector. Its recent success in lobbying PostComm with regard to the Royal Mail’s plans to change its Special Delivery service to the detriment of jewellers, is a case in point,” he says.

Commenting about his election as Vice Chairman, Michael Hughes said: “There is always a concern that bodies like the BJA are simply talking shops for a certain type of person who is interested in being on committees; but nothing could be further from the truth. Barrie and I are united in our desire to increase the relevance of the Association and to engage more fully with the membership.”

Other newly appointed members of the BJA’s national committee are Gary Williams of manufacturer B&N Rings and the gemstone dealer Richard Haruni of International Gemstones.

The guest speaker at the BJA’s AGM was Michael Rae, CEO of the Council for Responsible Jewellery Practices (CRJP) the global jewellery organisation committed to promoting good practice in all aspects of mining and jewellery production, which is backed by many industry leaders including mining companies and major retailers.

Rae, who travelled from Australia to address the meeting, spoke at some length about the long-awaited ‘Responsible Jewellery System’ (RJS) – which it is hoped will provide common standards, third party monitoring, and credible enforcement for the entire supply chain. Plans for the RJS are he said well-advanced but are still subject to legal review in the USA and full details are unlikely to be revealed until the late summer of 2008.

Rae, who came to the CRJP from the WWF said: “No other industry has tried to produce something of this magnitude. The timber trade has looked at a specific part of its supply chain but not the whole. What we are doing is quite revolutionary and many other industries are watching us with interest.”

Rae is adamant that the RJS will be open to all. “We want a broad church which is inclusive not exclusive and which encourages small suppliers to get involved,” he said.

There was good news for members of the BJA whom Rae said, thanks to the BJA’s involvement in the Council, will be able to benefit from Group participation in the scheme.