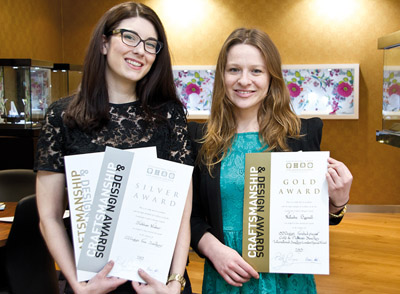 Natasha Bagnall and Siobhan Maher, both of whom are designers working within the New Product Development team at Domino, have won recognition for their creative abilities in the 2013 Goldsmiths’ Craftsmanship and Design Awards.

Natasha won a Gold Award in the ‘3D Design – Contemporary Jewellery in Gold or Platinum’ category for her striking ‘Heroa’ necklace design in platinum and diamonds with stunning ruby highlights set in rich 18ct yellow gold.

This piece was also awarded the ‘IJL Special Award’, and will go on display at International Jewellery London in September.

She was also a joint winner of the Marcia Lanyon Special Award for innovative use of coloured stones, and received a Commendation for 2D CAD presentation.

Speaking after awards were announced, Natasha said she felt incredibly flattered that a piece that so reflected her own design style and passions was given such a wonderful seal of approval from both Goldsmiths and IJL.

While Siobhan commented: “It is always so exciting to have your designs recognised in such prestigious awards, and to be a winner of the Marcia Lanyon Award as well was fantastic.”

Both have received Goldsmiths Awards before, but this is their first time as ‘Domino’ winners. 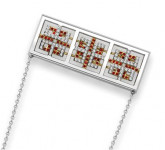 NPD team, which – when it is not being used to scoop Awards – is focused on creating winning designs for our customers,” said Andrew Sollitt, Domino’s sales and marketing director.