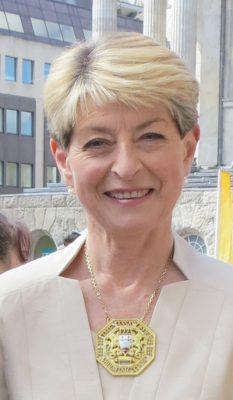 Two of the eight current Wardens (effectively non executive Directors) of The Birmingham Assay Office were recognised in the Queen’s Birthday Honours List.

Kay joined the BBC at its Pebble Mill studios immediately after graduating and was initially a reporter on Radio 4, working on ‘You & Yours’, ‘Checkpoint’ and ‘Woman’s Hour’. She moved on to the Midlands Today television team where she remained throughout her career, a familiar face and voice to all those in the West Midlands.

In addition to making a significant contribution to The Assay Office as its first female Chairman, Kay was a Director of the Birmingham Hippodrome Theatre Trust Ltd from 1996 to 2005 steering it through its massive rebuilding project. Kay is also an Ambassador for the National Forest and a Patron of Acorns Children’s Hospice.

Warden Wade Cleone Lyn is Founder and Managing Director of Cleone Foods, the largest producer of Caribbean style patties in the UK, making 100,000 patties and slices a week. His factory in Birmingham’s Jewellery Quarter employs 50 people, many of whom live in the neighbouring Ladywood area which is one of the most deprived in the country.

Wade, who came to the UK from Jamaica with his family as a young child, believes it is important for business people to take their community responsibilities seriously and put something back. Cleone Foods provides education and training opportunities for its workers as well as mentoring small businesses. It has an ethos of supporting community initiatives through sponsorship and practical support.

Wade is currently a Board Member for the Greater Birmingham and Solihull LEP and has been awarded a CBE for services to business in the West Midlands.

Current Chairman of The Birmingham Assay Office, Kate Hartigan says “This is wonderful news. We are immensely proud of Kay and Wade and delighted that the important and long lasting contribution they have both made to the West Midlands community has been recognised in this way. Their Honours are very well deserved.”