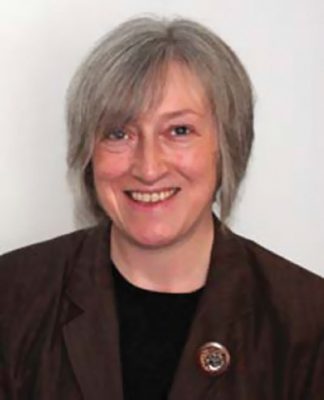 Sally Baggott began her working life as a Chemical Analyst, at Severn Trent Laboratories, at Tame House, right across the road from The Birmingham Assay Office!

In 1996, she decided on a change of career and studied English Literature and Cultural Studies at the University of Birmingham, and late nineteenth-century literature for her Ph.D. Before Sally joined The Birmingham Assay Office in 2005, she worked at the Museum of the Jewellery Quarter and Thinktank at Millennium Point.

Her connections with the Jewellery Quarter go back way before 2005, though. Her mother’s family actually came from Handsworth and had their businesses in the Quarter.

Her grandmother grew up in the Quarter as her parents ran public houses here. Her grandmother’s two brothers trained as diamond setters and her mother’s father was a silversmith.

While still at school, Sally was persuaded to go to silversmithing classes at the local night-school. “I often think that my fascination with jewellery and the Quarter may well have begun around that time,” said Sally.

As Curator, Sally takes care of the Birmingham Assay Office’s extensive silver collection and the Library. She conducts tours of the collections for visitors and deals with enquiries about historic hallmarks.

Her remit also includes promoting the history of the Birmingham Assay Office and heritage and increasing awareness of Hallmarking. She is responsible for forging partnerships with the heritage and local communities, working with institutions such as Birmingham Museum and Art Gallery, the University of Birmingham, Soho House and the Museum of the Jewellery Quarter.

Sally represents The Birmingham Assay Office in the several partnerships that are involved in planning the celebrations of the bicentenary of Matthew Boulton’s death in 2009, and she has recently been elected a Director of the Jewellery Quarter Association.

“I am fortunate in that I have a very interesting job. One day I might be giving a guided tour of the collections to visitors, the next I might be giving a research paper on Matthew Boulton and Birmingham toys; no two days are ever the same. I am immensely proud to be the Curator at The Birmingham Assay Office, the only remaining enterprise with which Boulton was involved, and it is a privilege to be responsible for educating the people of Birmingham and beyond about our fascinating history.”

Sally spends her spare time indulging her interests in the history of Birmingham and particularly the Jewellery Quarter and her passion for silver. Sally is also a keen gardener.

She has two sons, Aaron and Thomas and a four-year-old grand-daughter, Matilda-Jayne.