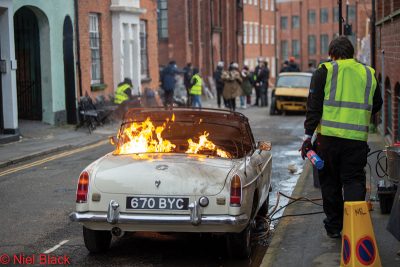 Story and pictures by Niel Black for The Hockley Flyer

In the last few years Birmingham has seen a number of cinematic projects use the area in and around the Jewellery Quarter as a backdrop.
The first series of ‘Line of Duty’ uses Great Charles Street Queensway, the canal, and the Queens Arms in Newhall Street and ‘Dark Money’ with Jill Halfpenny uses St Paul’s Square as a backdrop for a couple of scenes.

The biggest film shot in the JQ to date has been ‘Ready Player One,’ which saw Stephen Spielberg swanning around the area. He did such a great job that the JQ, like the best character actors, was barely recognisable.

The latest production to hit the streets of the JQ is based on the debut novel of Birmingham local, Kit de Waal – ‘My Name is Leon.’ Set against the backdrop of the 1981 Handsworth Riots, it tells the story of a nine-year-old mixed-race boy and his attempt to reunite with his birth family, after he is taken into care.

Produced by Douglas Road Productions (a Bani jay UK company) in association with Tiger Aspect Productions, Ringside Studios and Vicarious Productions. Cole Martin will play the lead in his first TV role, with Lynette Linton making her directorial debut on a TV drama with the screenplay by Shola Amoco.

I have always loved how film makers use angles and creativity to draw the viewer into believing what is presented to them on the screen. The amount of work involved is incredible. Details that will flash onto the screen for just seconds can take hours to set up and rehearse. You might not see all those details but if they are not there or are not done properly, they stand out like a sore thumb.

This attention to detail might not make a bad film good but not having it can diminish from great acting and a brilliant script. It was a real privilege to have the opportunity to observe this recently on the street below my building.

I witnessed Regent Place being dressed, scenes rehearsed, and special effects practiced throughout the day of Friday 17th March. This all came together in the evening, as the actual scenes were shot. By early Saturday morning Regent Place had been returned to its original state, with no sign that anything had taken place.

There is not currently a release date for My Name is Leon, all I do know at the moment is it will be shown on the BBC. The Hockley Flyer will give details when known.