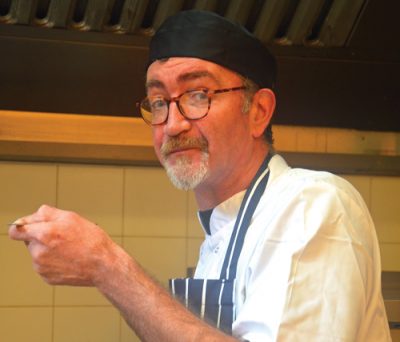 Chef Jonathan Chatfield has cooked up the recipe for success in the latest course of a career that has seen him return home from the home of good cooking. He has taken on the job as chef at St Paul’s Dining Club in Birmingham that has been providing good food since 1859.

Jonathan, aged 52, had originally planned to work in the classroom but whilst taking a teaching degree his took a job in a restaurant to make some money.

“I discovered that cooking was what I loved doing and the rest is history,” said Jonathan who is sharing his passion for French cuisine with diners at the Club in the historic St Paul’s Square.

St Paul’s Club was founded by merchants from Birmingham’s jewellery quarter 159 years ago and good food has also been an important ingredient for the Club that offer other facilities for members. 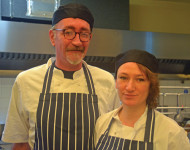 Jonathan worked in Denmark for a number of years before moving to the Dordogne in south west France where he refined his trade catering for the most discerning pallets in the world.

“It’s impossible not to live and work in France without appreciating good food and I often return,” said Jonathan. “France provides my inspiration, but I love cooking good quality traditional English food as well as enjoying fusion and Asian cuisine.”

The French influence at St Paul’s Club is reinforced by sous-chef Claire Belloir who is married to a Frenchman. “We make a really good team and it is just what I wanted when I returned to Birmingham to work in the kitchen at the historic St Paul’s Dining Club where our members and their guests take their food very seriously,” added Jonathan who joined St Paul’s Club in December.