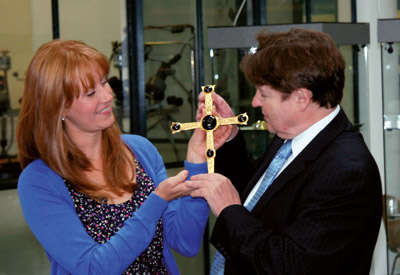 A team of skilled, dedicated and diverse Birmingham craftsmen has once again demonstrated the wealth of talent in the Jewellery Quarter by producing a bespoke civic gift for the Pope in less than six weeks from start to finish.

Seeking an appropriate gift for His Holiness, Birmingham City Council commissioned a replica of the ‘crumpled cross’ found amongst the Staffordshire Hoard.

The cross was crafted in Birmingham’s Jewellery Quarter using local skills and hallmarked with the famous anchor town mark at the Birmingham Assay Office.

The result was a perfect example of co-operation where local skills and technical expertise combined to produce a unique Birmingham made gift to mark this historic visit. 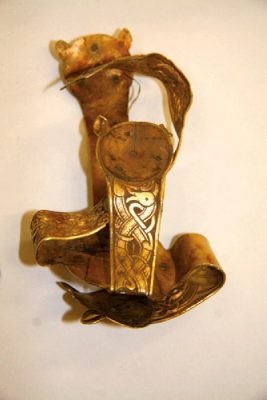 Award-winning local silversmith Shona Marsh said: “This was a fascinating project. I was honoured to have the opportunity to research the original cross and to reproduce it by working closely with some extremely talented and skilled outworkers in Birmingham’s Jewellery Quarter.”

Mark Watkins, a technologist from the JIIC, was given the initial task of ‘unfolding’ the cross on screen using artist’s impression, before his images were made into patterns.

The five pieces that form the cross were then cut separately and soldered together before being plated in gold with garnet insets to make it look as it would have done in Anglo Saxon times.

The silver was donated by Cookson Precious Metals and staff gave up their own time to work on the project.

The cross, which has been hallmarked with the City’s anchor at the Birmingham Assay Office and is the size of an A4 sheet, was placed in a presentation box made by Chris Croton, of Britain Clock Cases Ltd.

Councillor Alan Rudge presented the Cross to Pope Benedict before he carried out Mass in Cofton Park, during his visit to Birmingham.