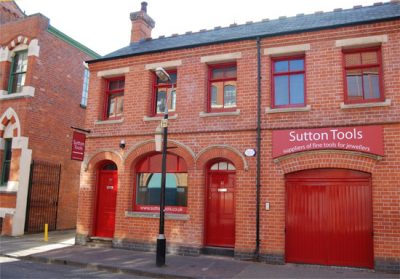 In line with the company’s ambition to stay at the heart of the Jewellery Quarter, the Sutton’s team have brought back to life two historic factories, at the same time revitalising a largely unknown courtyard next door to the School of Jewellery.

Purpose built for multi occupancy, the building has two doors fronting onto Vittoria Street, one of which leads directly to the upstairs range. Internally there is no link between the two floors. 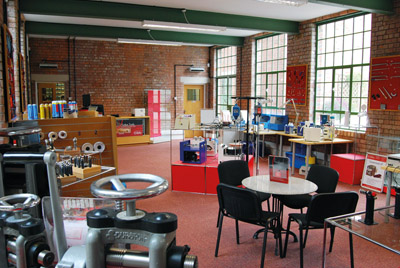 The factory was occupied in 1900 by AE & WM Hollins engravers and by 1916 it housed watch case makers, engravers and a gold ring maker.

Little is known about its occupancy until the 1980’s, when silversmith Mike Kennedy founded Vintage Lamp Restorations, having bought many of the original Lucas lamp factory patterns and tooling to make replacement headlamp units for vintage cars.

He incorporated plating firm Cotton Bros and operated from 91 Vittoria Street until his death in 2005, when the business relocated to Solihull. The factory has been silent until now, when it houses the operational base for Sutton Tools with warehousing, order preparation, despatch and a repair workshop. Plans are also in hand for a much needed testing, demonstration and training facility to support sales of specialist tools and technology.

To the rear of 91 Vittoria Street is the factory built in 1915 for Edwin Gyde, diamond mounters, part of which was sublet to silversmiths Martin Hall & Co. Subsequently the building was occupied by Feridax, once a supplier of components and spare parts to the UK motorcycle and scooter industry. Derelict since the 1950’s, the factory has now been restored to its former glory.

The first and second floors form part of the William Hill building on Frederick Street but on the ground floor the factory links through to 91 Vittoria Street and houses the Sutton Tools showroom and offices.

Access is via a pedestrianised walkway to a sunny courtyard, tucked away behind the School of Jewellery. Fully glazed on both sides, the new showroom enjoys a light and airy ambience – an ideal environment in which to showcase the latest jewellery making technology alongside the traditional tools, equipment and consumables for which Sutton Tools is renowned.

Thomas Sutton’s great granddaughter and Managing Director, Maggie Nichols, intends to create a peaceful oasis away from the hurley burley of the streets where visitors, customers and students can snatch a few moments of relaxation in the sun after visiting the new showroom.

Another bonus for Suttons is regaining the telephone number 0121 236 7139 which was the company’s number for over 50 years at 166 Warstone Lane and subsequently 37 Frederick Street before the company’s enforced move to Vittoria Street in 2006.

Maggie says that some of the company’s older customers may even remember when the company’s number was Central 7139 – before the days of subscriber dialling and of course so much of the equipment sold into the industry bears a characteristic silver label with 0121 236 7139 as the contact number for Suttons.

Maggie said, “This move has allowed us a fabulous opportunity to reinforce Suttons’ passion for the finest tools and technological innovations, together with the very highest level of service, in such an iconic location. We look forward to welcoming everyone to Suttons’ new home.”