Home » Property » Hotel Agreement gets St Georges Scheme off to a Flying Start! 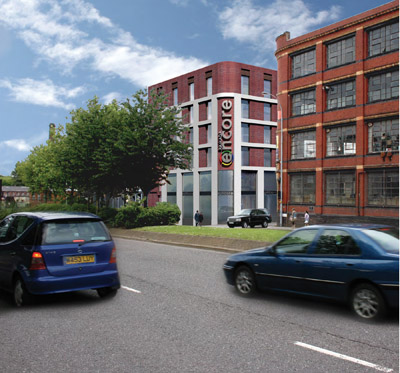 Chord Deeley has signed its first occupier at St Georges, the £160 million mixed-use scheme in Birmingham’s Jewellery Quarter. A £15 million Ramada Encore hotel – the first in Birmingham – is to be developed on the corner of Icknield Street and Pope Street by joint venture partners Alfred McAlpine and New World Leisure, who have agreed to acquire a prominent site within Phase I of the development.

The proposed boutique-style budget hotel, which has been submitted for planning permission, will comprise 151 bedrooms housed in a 62,828 sq ft (5,836 sq m) building. A new 237 space multi-storey car park is planned next door.

St Georges is one of the biggest regeneration sites in Birmingham. The 6.8 acre (2.75 hectare) site, bounded by Icknield Street, Camden Street and Carver Street, and incorporating Pope Street and Moreton Street, will create a prominent new gateway at the currently run-down Icknield Street entrance to the Jewellery Quarter.

More than 720 homes, offices, two hotels, a multi-storey car park and retail and leisure space are planned, creating a total of 1,500 jobs, including 45 (30 full-time, 15 part-time) at the Ramada Encore.

Tim Hurdiss, director at Chord Deeley, said: “The signing of the Ramada Encore gets the St George’s scheme off to a flying start. They are a superb anchor for the site and will undoubtedly be a draw to other occupiers. Birmingham as a whole, and the Jewellery Quarter in particular, is ‘underhoteled’. The Ramada Encore will be a welcome addition to the city skyline.”

Alfred McAlpine and hotel operator New World Leisure have an agreement with Wyndham Hotels and Resorts, owner of the Ramada brand, to build ten Ramada Encore hotels around the UK, in addition to other Wyndham-owned hotel brands. The Birmingham operation is planned to be the eighth Ramada Encore hotel in this development programme.

Mark Wright, development director at Alfred McAlpine, said: “Birmingham city centre has been on our hit-list for some time, but finding the right site has been challenging. The St Georges scheme enjoys a great location on the outer ring road in an area crying out for a quality hotel. We hope to commence construction in Spring 2008, with the hotel opening the following year.”

Once planning permission is granted, the Ramada Encore will be part of the first phase of development at the St Georges scheme. Phase two will see the conversion of the Kettleworks, the former Swan kitchenware factory on Icknield Street, into 234 apartments and 12,700 sq ft (1,180 sq m) of commercial space.

The St Georges scheme is a joint venture by Chord Developments and Deeley Properties. Jewellery Quarter specialists Chord, based in St Paul’s Square, has more than £75million of development underway or in the pipeline in the area. Deeley Properties, part of the award-winning Deeley Group headquartered in Coventry, is a leading national developer with current projects in Coventry, Southampton, Oxfordshire, Buckingham and Bristol.