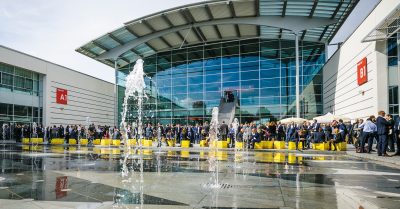 inhorgenta europe 2007, which took place on the grounds of the New Munich Trade Fair Centre from February 23 to 26, 2007, was able to record another increase in visitor figures following the one at the event in 2006.

It became clear during the course of the trade fair that manufacturers have a guarded optimism with respect to future business developments, while retailers expect a substantially better market development.

Trade fairs are always considered as a reflection of the industry, and inhorgenta europe has demonstrated one thing above all: business is again improving in the industry. That was clearly felt in the trade fair halls, in the aisles and at the booths of our exhibitors”.

The topic of men’s jewellery was especially a focal point at inhorgenta europe 2007. The exhibitors presented an increasingly large range of necklaces, armlets, ear studs and pins. Another trend is silver combined with natural materials as well as precious pearl necklaces. In addition, historical, ethnological and romantic styles as well as motifs were observed at the trade fair. Increasing application of old handicraft techniques by designers was also seen.

inhorgenta europe 2008 will take place on the grounds of the New Munich Trade Fair Centre from February 15 to 18, 2008. www.inhorgenta.com