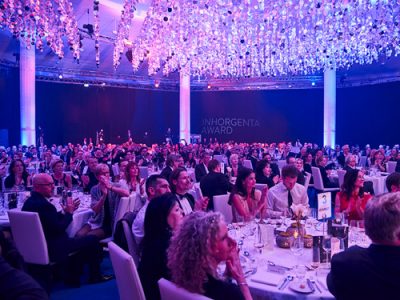 One of the trade show’s highlights enters the second round: the Inhorgenta Award. The award presentation by Inhorgenta Munich 2018, Europe’s largest trade show for Jewellery, precious stones and timepieces, is the culmination of the four-day industry event.

The second Inhorgenta Award points the way again. The get-together of industry experts, manufacturers and customers at the trade show provides the perfect setting for awards for special designs.

However, this means much more for the industry than just celebrating itself: “The Award increases public awareness of jewellery and watches”, says Klaus Dittrich, Chairman and CEO of Messe München. In addition, manufacturers receive enormous support in their sales efforts according to the Messe CEO.

All manufacturers and designers of jewellery and watch collections are entitled to participate- even those who do not participate in the trade show may present their candidacy. A top-class jury, composed of prominent and professionally competent representatives from the show, design and model business, will select the Award winners. When the red carpet for the Inhorgenta Award will be rolled out in February, three new faces will enrich the team around star presenter Alexander Mazza:

Barbara Becker, a native of Heidelberg, is a well-known actor and TV presenter. Moreover, she is herself a designer of jewellery and fashion.

Patricia Riekel-he Grande Dame of German people journalism. She has been at the top of the (German) magazine ‘Bunte’ as an editor-in-chief and most recently as a publisher for 20 years.

Markus Hilzinger – the multi-award winning interior designer and product designer is an expert for interior design and decorations. According to the ‘AD Architectural Digest’ magazine, the Berliner-by-choice ranks among Germany’s “top 50 designers.”