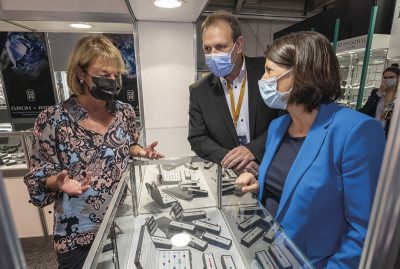 New team, new concept, more exhibitors: this year’s Intergem from 24 to 27 September was brimming with confidence. Despite the limitations of hygiene regulations due to the coronavirus pandemic, the ninety-one exhibitors could welcome 1,460 visitors from eighteen countries to their stands.

“We are very satisfied with this year’s Intergem,” says the fair’s managing director, Mirko Arend, who has been in office since the beginning of the year. “The remarkably busy Sunday of the fair utilised the potential of the new Intergem to the full. We were surprised by the international makeup of the visitors, who had not only travelled from the Benelux countries, but also from France, Spain, Italy, Russia and even China.”
The significance of the fair was reiterated by Daniela Schmitt, State Minister for Economics, Transport, Agriculture and Viticulture in the state government of Rhineland-Palatinate, who officially opened the fair in her capacity as patron, saying: “Idar-Oberstein is sending a clear signal out into the world: the trade fair business starts again.”

Idar-Oberstein’s lord mayor, Frank Frühauf noted: “The jewellery and gemstone sector is a beacon for the region and the state as a whole, a beacon that is now set to shine around the world once more.”
Dr. Konrad Henn, chairperson of the fair association, added: “The jewellery and gemstone sector needs direct contact, which is why fairs are vital for us.” Also participating in the opening tour was Julia Klöckner, Federal Minister of Food and Agriculture.

Project manager Selina Schmidt summarises: “Compared to the covid edition last year, the signs are pointing to growth again. What I was particularly pleased about was the response to our latest support programme, especially the workshop of blogger Katerina Perez from Paris, who demonstrated how to use Instagram to contact target groups for jewellery and gemstones.”

The daily jewellery shows, appearing this year for the first time, were also welcomed positively. On the second day these already needed to be expanded as a number of exhibitors were also keen to present their pieces on the catwalk. Here the fair offered numerous Instagramable moments on an Intergem photo wall with jungle motif. A further highlight was the GZ Intergem talk on Saturday, addressing the current challenges regarding laboratory diamonds and their significance for the sector.

All contributions from the forum were recorded and are available as a video stream at www.intergem.de until the end of October. 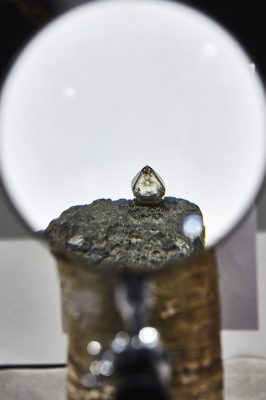 The exhibitors declared themselves satisfied with the outcome of the fair. “The fair clearly exceeded our expectations,” says Nicole Ripp of Groh + Ripp. “Although there were fewer visitors than in the pre-corona times, the quality was considerably higher. We recorded particularly good sales. All of the customers that we invited also made an appearance.”

Dr. Konrad Henn, represented at the fair with Karl Faller, adds: “Our customers appreciate the small, high-quality format of the event in combination with the Idar-Oberstein flair and local know-how. We had many potential customers on the stand and were surprised at how international the visitors were. We were able to welcome a number of new customers, including from China and Russia.” Hubert Arnoldi of HC Arnoldi reports: “For the current circumstances the fair was a good one, with visitor numbers noticeably higher than the previous year. We welcomed customers from Switzerland, Britain, France, the Netherlands, a little pot pourri of Europeans, in other words.”

Isaline Arnoldi adds: “The new fair concept met with a positive response: it is contemporary and modern. It was also great that Katerina Perez took her worldwide community with her on a journey through Intergem. We are looking forward to 2022.”

Maximilian George of new exhibitor Noble Osmium agrees: “The fair made a great effort, with the jewellery shows, great guests like Ms Perez and the discussions. It would be nice if this served to strengthen the jewellery sector further in the coming year.”

Birgit Becker of Richard Hans Becker says: “The Intergem is and remains the expertise fair for gemstones, offering bundled knowledge and quality on a small area. I would like to see all local firms appearing as one again, to present the incredible power of the sector in Idar-Oberstein.”

The Atelier Tom Munsteiner also has positive things to say: “We were especially pleased to be exhibiting at a fair again after a long “forced break,” and Intergem delivered a very attractive setting, with great new concepts. We also had the impression that the mood was very good amongst both visitors and exhibitors. All in all, Intergem was a successful fair, characterised in particular by the quality of the participating exhibitors, and a great launch for the slow but sure reopening of the fair sector.”

The signs are therefore pointing to more normality and an even stronger Intergem 2022.