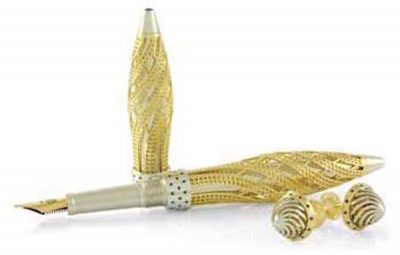 The ‘Architect’ Collection of fountain pens and cufflinks are individually hand crafted in solid silver and gold and set with accents of precious sapphires and diamonds. Design inspiration is drawn from iconic British architecture, most notably one of London’s most famous landmarks, the ‘Gherkin’.

The iconic profile and geometric spirals are reflected in the pen’s elaborate silver and gold filigree. The design prototype, originally developed whilst studying at Birmingham’s famous School of Jewellery, won Jack Row a gold medal prize, awarded by the Worshipful Company of

Regarding his design philosophy, Jack commented: “I wanted to create a collection of functional items that could be valued as much as objets d’art as fine jewellery or writing instruments.

I hope they will appeal to discerning, design conscious individuals and collectors who wish to invest in exclusive British design and craftsmanship.”
Harrods’ interest in supporting the twenty-five-year-old designer was initiated when he presented them with his initial prototype.

The materials utilized in the hand crafting of Jack’s pieces also undoubtedly makes them a sound financial investment. During times of recession, investment in traditional commodities such as gold and diamonds sharply increases.

Each piece is individually made to order by Jack Row in his studio based in Birmingham’s historic Jewellery Quarter. The young designer uses a combination of traditional goldsmithing skills and cutting edge technology to create his intricate works of art. Every design also carries a British hallmark, struck by the Birmingham Assay office, guaranteeing the purity of the precious metals.

And the question that you are longing to ask – how much does one of these pens or pair of cufflinks cost? The most affordable cufflinks are priced at around £3,500 and the top of the range 18ct gold and diamond pen prices at around £27,500.

About Jack Row:
After completing four years of traditional training as a goldsmith, Jack attended the School of Jewellery (Birmingham City University), one of the most famous institutions of its kind in the world, based in Birmingham’s historic Jewellery Quarter. Graduating with a first class honours degree in Jewellery and Silverware Design in 2009 he went straight into employment with one of Europe’s leading bespoke jewellery companies, Weston Beamor Ltd.

The company encouraged Jack to pursue his own design work and allowed him time and resources to get his ideas off the ground. In 2010, Jack set up his studio in Birmingham and began designing and creating with an emphasis on luxurious and innovative pieces that would showcase British design and craftsmanship.

As well as producing his own work, Jack is also a visiting lecturer at the Birmingham School of Jewellery (part of Birmingham City University) where he teaches short courses to both full and part time students.