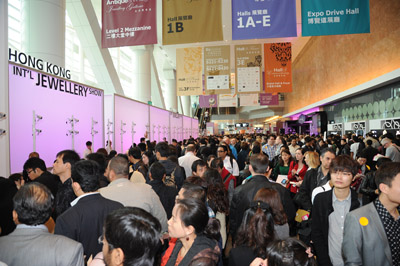 21 February 2012 – The 29th edition of the HKTDC Hong Kong International Jewellery Show came to a successful close yesterday. The five-day show, the second-largest of its kind in the world, drew a record-breaking 38,000 buyers, up three per cent over the previous year.

BRICS Buyers
Buyers from the BRICS countries (Brazil, Russia, India, the Chinese mainland and South Africa) were up eight per cent. “Rapid economic development in the emerging markets, especially the Chinese mainland, has resulted in an expanding middle-class, which in turn is creating huge product demand. The HKTDC will continue to step up publicity in these emerging markets to help Hong Kong SMEs capitalise on the opportunities.”

Busy Exhibitors
More than 3,100 exhibitors from 48 countries and regions took part in the show. First-time exhibitor Sandjewels, an Argentina brand, succeeded in attracting buyers with its black onyx jewellery. “We have had business discussions with buyers from Brazil, Russia and Eastern Europe, and have made ourselves better known to Asian buyers, so our show objectives have been met,” said the company’s Richard Frounjian.

Jean Baptiste Senoble, a representative of Switzerland’s Senoble & Bryl SA, said the company was taking part in the show for the first time. “Our customers are high-end jewellers and collectors, mainly based in the United States and Europe, but we want to move into Asia, and this is why we are here. We are particularly keen to develop the Chinese market, but we have also talked with buyers from Japan, Singapore and Taiwan.”

Raymond Ng, Director of Hong Kong’s Yokee Hong Diamonds Jewellery Ltd, said he valued the mainland market and the Indian market in particular. “Mainland buyers are more eager to place orders. Some of them have even placed orders and made money transfers without even seeing the products in question,” he said.

Konstantin Zakirov, a buyer from Russia, said he attended the show “to source silver, cubic zirconia, gold and diamond jewellery. I’ve already met some good suppliers from Hong Kong and Thailand. And I am going to place US$1-US$2 million worth of orders here.”

Australian buyer Antonia Algeri said that the presence of exhibitors from all over the world, and the great variety on offer, “allowed me to buy all my favourite products in one go.”
Website: www.hktdc.com/hkjewelleryshow