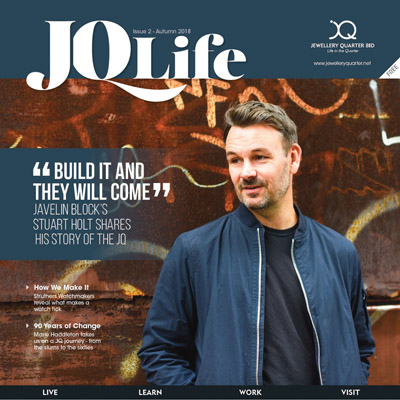 The second issue of the Jewellery Quarter Business Improvement District (JQ/BID) magazine is out.

The ‘JQ Life’ magazine is full of news, updates, features and information about the Jewellery Quarter and was launched following the renewal of the JQBID for an additional five-year term and offers a fresh angle on the people of the JQ; whether they are employees, business owners, students or residents.

The first issue featured an opinion piece “In Their Own Words” with Marion Wilson, the Academy Director at the Birmingham Assay Office.

The second issue of JQ Life features the first of a series about Marie E Haddleton, ‘90 Years of Change’ – the first being about ‘The Slums of Hockley’ – (Marie was born in Hockley 90 years ago) and following through in future issues right up to the present day.

There are also features on ‘How We Make It – Struhers Watchmakers reveal what makes a watch tick, and “Build It and They Will Come – Javelin Block’s Stuart Holt shares his story of the JQ

The magazine is being distributed around Birmingham and will be available to collect at the JQ’s cafés, bars and restaurants. It will make a good ‘shelf companion’ to the Hockley Flyer Magazine (400th issue in November 2018) at the many pick-up points.

A digital version of both magazines are also available to read on the JQ/BIDS and The Hockley Flyer websites.