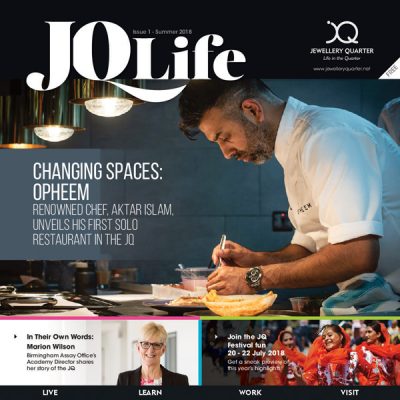 Formerly ‘Quarter Life’, the fresh-look ‘JQ Life’ magazine is full of news, updates, features and information about the Jewellery Quarter.

Following the renewal of the JQBID for an additional five-year term last year, the magazine was revamped and offers a fresh angle on the people of the JQ; whether they are employees, business owners, students or residents.

Features in this issue include a preview of the JQ Festival, an interview with award-winning chef Aktar Islam about his recently opened Indian restaurant ‘Opheem’ and an opinion-piece “In Their Own Words” with Marion Wilson, the Academy Director at the Birmingham Assay Office

The magazine will be distributed around Birmingham and will be available to collect at the JQ’s cafés, bars and restaurants.

We hope that you enjoy the magazine and if you would like to share it with those around you.

A digital version is also available to read on the JQ/BIDS website.

The new magazine is produced by Digitalglue (Greta Geoghegan Editor).