Home » Local Trade News » The Millies – Made in Birmingham 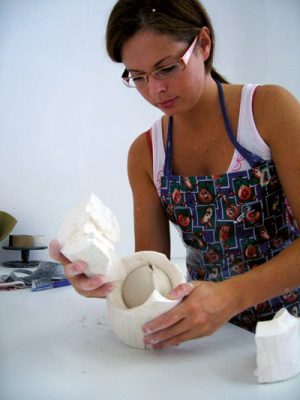 Kerry O’Conner graduated from Liverpool Hope University in 1999 with a bachelor of design degree, specialising in silver and ceramics.

She then moved to Birmingham to become part of ‘Design Space’ which is a scheme especially designed to help craft makers set up their own businesses.

Upon completion of this one year funded workshop, she chose to stay in the area and set up her studio in the famous Jewellery Quarter.

Her products, with their sculptural formation are very ‘up to date’ with the minimalist sleek interior of today’s fashion.

There has been a great enthusiasm to collect her work because she brings together silver with porcelain which is an unusual combination. They capture the attention of those who are design conscious and want luxury but function in their home.

The process for developing her designs starts with inspirational first hand drawings of exotic plants and flowers and she visits such places as the ‘Eden Project’ in Cornwall to gather ideas.

Once a substantial amount of sketches and photographic evidence has been gathered she will begin designing. This is done by dissecting the images of an individual flower to its simplest form and by rotating these linear shapes and bringing others together it will create simple diagrams that can be translated into 3D sculpture.

She uses plaster to do this because it is an inexpensive material that is quick to work with when forming a 2D drawings into a 3D prototype. When happy with the design she creates a mould and after a slow thorough drying process, they are ready to use and cast from.

These slip-cast porcelain pieces are fired initially to 1000 degrees and then a transparent stoneware glaze is applied which protects the surface and makes them water resistant once they have been fired for the second time to 1260 degrees in temperature; this also creates strength and durability for what are frequently used items.

Kerry’s new salt and pepper vessels have porcelain bodies each with an individual detail that has been hand-created from sterling silver. There are different silversmithing processes used when making these tops such as doming, hand forming and anticlastic raising. When finished they are bonded to the top surface of the porcelain, each one with a difference.

Because her work is designed in relation to tactile qualities found in nature, her pieces are to be used and enjoyed but simply as a pleasure to look at.

“I was given a Princes Trust grant several years ago to help springboard my tableware and interior products into business.” 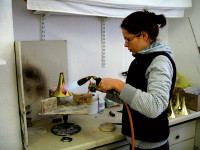 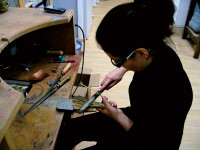 Having this opportunity meant that Kerry was able to buy pieces of equipment and tools that she may not have otherwise afforded. Her pathway was then set and she was then able to produce one of her signature pieces, which was a chalice and patent for Liverpool Hope University. This piece was admired and won Kerry a fantastic commission – The Sun Military Awards (The Millies)

“I was asked by The Sun newspaper to come to their head office and present some ideas to them for an award. This award was to have one main objective and that was to represent the Navy, Army and Air force equally. The brief was very open ended- it was not to be too modern and not to be too traditional. 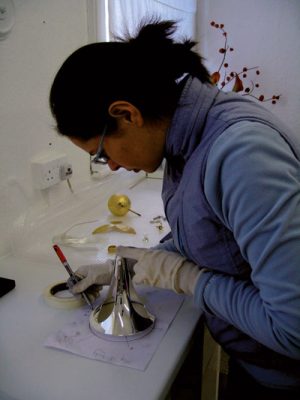 Where would I begin……? I worked through many ideas, shapes and style with much deliberation but kept coming back to one thing which I believed clarified this award simplicity. the Navy, Army and Air force are those who protect, serve and in my eyes look after us, in our world.”

The inspiration for this award came from the world and the fact that the Military in one form or another have been present on it for hundreds of years.

I wanted to have the globe represented as a solid foundation from which these three strands hold and encompass it. The proud crests upon the top surface point down to what they protect!”

This has been the most challenging project Kerry has ever undertaken because it was not one award but eleven that she had to hand make and produce in such a short deadline. Her feelings not surprisingly mixed between excitement and sheer panic!

She was delighted and honoured to have been involved with such a prestigious event in December 2008 and this was highlighted when HRH Prince Charles requested to meet her at the ceremony.

This year’s ‘Millies’ event will be televised in December 2010. Log onto The Sun or Kerry’s website for further detail.