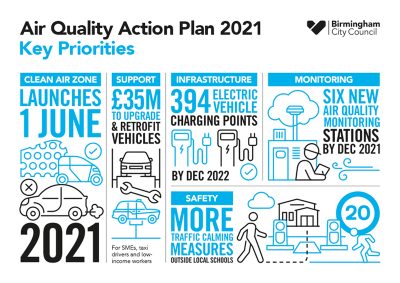 The findings in the report also reaffirm the need for a Clean Air Zone to deliver air quality improvements in the city centre region.
Birmingham City Council’s Head of the Clean Air Zone, Stephen Arnold said: “Birmingham currently has unsafe levels of nitrogen dioxide, and we know this has a detrimental effect on the health and life expectancy of our citizens.

“The Clean Air Zone is a significant first step in tackling this issue, but – as this plan has shown – other actions must be taken alongside its implementation if we are to make meaningful improvements to air quality.
“We are already well on our way to delivering some of the priority actions in this plan, which align closely to the ambitions in Birmingham’s Clean Air Strategy and Route to Zero Action Plan.”

The Air Quality Action Plan also sets out a strategy for assessing air quality in key areas around the city, with an ambition to install six new air quality monitoring stations by December 2021. Further assessments will help to identify areas of poor air quality in Birmingham, the causes and what appropriate action can be taken to help improve it.

The Air Quality Action Plan 2021 was consulted on from 21 September – 2 November 2020. More information and a direct download to the report is available on the Birmingham City Council website.