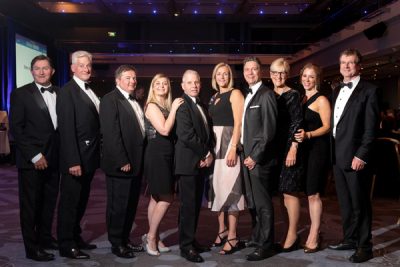 The recent Chartered Trading Standards Institute (CTSI) Symposium in Brighton saw many Trading Standards Officers rewarded for their outstanding contributions to the Service and the prestigious Touchstone Award was amongst these. The award was presented by Andrew Hinds of F. Hinds, former Chair of the NAJ and a member of BHC.

The impressive sterling silver award was won by Shared Regulatory Services (Cardiff, Bridgend, and Vale of Glamorgan) for their ongoing hallmarking enforcement projects. Their application comprised two parts: proactive visits to 21 jewellers; and thorough follow up to a single complaint. The first activity revealed four premises selling un-hallmarked goods and a fifth offering counterfeit goods as well as some un-hallmarked items. Fake Louis Vuitton and Chanel items with a potential retail value of £25,000 of were seized from one store.

Subsequently an exhaustive investigation following a complaint about an eBay seller led SRS to expose a trader selling mis-described, un-hallmarked jewellery, counterfeit jewellery, and unsafe cosmetics. The business partners in the eBay seller are currently awaiting sentencing for numerous offences amounting to twenty-three charges each. 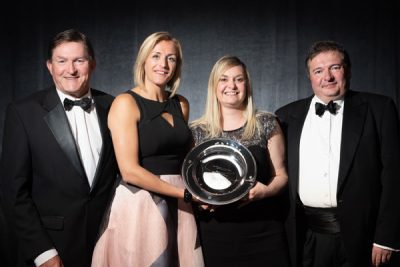 The range of activity and offences uncovered in Touchstone Award applications demonstrates that a hallmarking offence is frequently the tip of the iceberg. Birmingham Trading Standards’ application for their intensive two year “Operation Egyptian” concerning fake gold bangles was felt to be such a significant case that the British Hallmarking Council honoured the team led by Sajeela Naseer, Gary Singh and Mick Davies with a Special Award during the “Institute Celebrates Success” session earlier in the day.

Unscrupulous online traders competing with legitimate sellers and “bricks and mortar” retailers have created additional significant new problems for enforcement, particularly as Local Authorities are cutting budgets and reducing resources drastically. The collaboration between the NAJ, Assay Offices, the BHC and Trading Standards is crucial to the future of the legitimate jewellery industry.

Presenting the award, Andrew Hinds told Trading Standards officers: “The jewellery industry represents 1% of the UK economy and employs 60,000 people, hence our desire to see it protected. Global trading via the internet has increased the vulnerability of consumers, and this is especially true in jewellery due to misleading and fraudulent descriptions. This makes your enforcement role more important than ever before. We recognise the challenges facing your service. We have made our concerns known to Government and will continue to do so.”