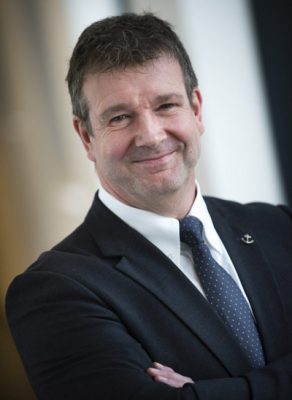 Doug, who is currently joint CEO, will commence his new appointment as the company’s 14th Assay Master on Monday 3 April 2017, having originally joined AnchorCert Group to restructure the quality management system in September 2014.

Doug then successfully project-managed the business relocation to Moreton Street in July 2015. Doug has subsequently led the management of the Indian off-shore sub-office, and continues to support the development of quality management processes and bespoke management systems.

Doug has spent more than 20 years as MD of specialist manufacturing engineering companies across the Food, Chemical, Fine Chemical and Petrochemical industries on a global basis. He has a strong commercial focus and track record, having also established and managed sales and service operations throughout Europe and North America.

A strong driver of change, Doug has project-managed several multi-million pound contracts in the UK, South America, Europe and the Middle East.
Commenting on the appointment, Chairman Kate Hartigan said: “We are delighted to welcome Doug as CEO and Assay Master as successor to Stella. He has worked with us on several key projects such as the relocation and the launch of our sub-office in India, and contributed significantly to their successful delivery. Doug’s appointment will ensure both a seamless transition of leadership for the AnchorCert Group and also continued focus on the achievement of our strategic objectives.”

Stella Layton, the outgoing CEO will retain close links with both the Jewellery trade, and specifically with the AnchorCert Group, as she resumes the role of Guardian. Stella intends to utilise her considerable project management and manufacturing experience and knowledge, by providing independent consultancy to the trade and beyond.