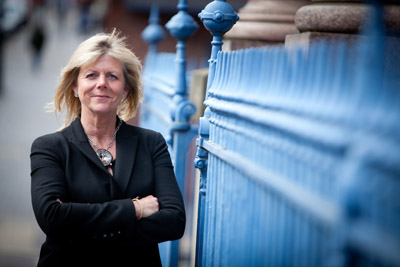 Collaboration and communication are two key objectives for Stella Layton, who has been elected as the new chairman of the Jewellery Quarter Development Trust (JQDT).

David was instrumental in establishing the JQDT and the Jewellery Quarter Business Improvement District (JQ BID), and will continue to be involved in the development of the historic area of Birmingham.

The JQDT, formed in May 2011, is a Community Interest Company that operates for the benefit of the communities in the Jewellery Quarter. The Trust also oversees the JQ BID, which carries out a range of activities for the benefit of all who live, work, learn, invest in and visit the area.

Ahead of the announcement of the Council’s new budget in April, which may withdraw some financial support for the city’s BIDs, Stella is looking forward to meeting the chairs of the other seven BIDs in Birmingham to continue the ‘joined up’ and collaborative relationship.

Stella said: “If financial support is withdrawn by the council, the BIDs will need to work even harder to ensure they deliver their objectives for levy payers within the budget. This is why it’s so important that the Jewellery Quarter is involved with any decisions that affect the city centre and the BIDs communicate and support each other.

“I also want to develop collaborative working between businesses and organisations within the Jewellery Quarter, particularly through training and apprenticeship opportunities. I’m looking forward to working alongside the Trust’s board of directors to continue to improve the area to attract new businesses, visitors and residents alike.”

Before becoming the chief executive of the Assay Office in January 2014, Stella worked for Cookson Precious Metals Division, whose headquarters are based in Vittoria Street, for 28 years.

During her time with the company, she progressed to a role as global divisional director. Stella also became a Guardian of the Assay Office in 2007 and is a former chair of the British Jewellers’ Association (BJA).

Stella added: “The Assay Office has been at the heart of the Jewellery Quarter for more than 240 years. Our proposed move to the other side of the Quarter, which should be completed in July, will create a fantastic new asset for the area and underlines our commitment to the area.”