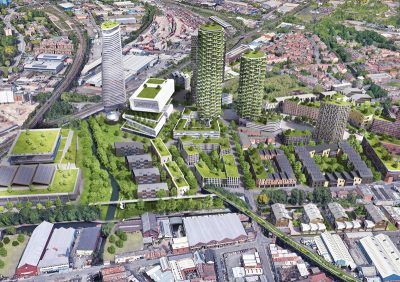 Businesses and communities across Birmingham are being called upon to help shape a bold new future for their city which has been launched today (26 January 2021).

Our Future City Plan: Central Birmingham 2040 ‘Shaping Our City Together’, was launched at a virtual event hosted by Estates Gazette, kickstarting the conversation on the future development of Central Birmingham over the next 20 years.

The ambitious strategy focuses on creating people-centred environments, opportunities for growth in emerging green industries, improving health and wellbeing through access to green spaces and making cycling and walking easier, safer and attractive.

A key aim of these proposals for the Central Birmingham area is to strengthen the links with the city centre and its integration with surrounding inner city suburbs such as Aston, Nechells, Balsall Heath, Small Heath, and Sparkbrook.

Public consultation on the proposed vision and strategy, which will be used to help inform the Our Future City Plan: Central Birmingham 2040 Draft Framework, due to be released in the autumn.

The impact of the COVID-19 pandemic, alongside wider environmental, societal and economic challenges has prompted the launch of this project, which will eventually replace the Big City Plan, the existing city centre masterplan launched in 2010.

Details of virtual events and activities that will be taking place as part of this consultation will be added in due course.
Public consultation began on 26 January)and runs until 26 March 2021. Feedback received will go on to inform the OFCP Central Birmingham 2040 Draft Framework to be released in autumn 2021 for further consultation.