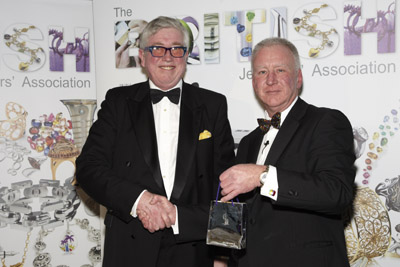 Patrick Fuller, Chairman of WB The Creative Jewellery Group, has received the British Jewellers’ Association’s ‘Lifetime Achievement Award’. The presentation was made as part of a special Awards ceremony held at ‘The Benevolent Society Ball’ – an annual event organised by the British Allied Trades Federation – which took place in Birmingham on 6th December.

It is the first time that such an Award has been presented by the Association which this year celebrates the 125th Anniversary of its founding.

Speaking during the presentation, David Doyle, who is a past Chairman of the BJA and Vice President of the Benevolent Society said: “Tonight’s winner is widely regarded within the trade as a progressive thinker. He combines a talent for identifying product opportunities within the jewellery marketplace with an excellent set of interpersonal skills. He understands that success is a team business and knows his own strengths.”

Fuller’s achievements are indeed significant. He and his wife Vivian have, over the past thirty five years, built one of the UK’s largest and most progressive jewellery businesses: ‘WB The Creative Jewellery Group’. The group comprises some of the industry’s best known brands: Domino, Weston Beamor, Ad Valorem and most recently Gecko which the group acquired earlier this year and which was, coincidentally, a runner up in the ‘Supplier of the Year’ category of Awards.

A supreme networker, Fuller has during his career given generously of his time to support various industry bodies. He is a past chairman of BJA and was President of the British Jewellery and Giftware Federation (now BATF). He also has the distinction of being the first ever non-retailer to become President of The National Association of Goldsmiths. A fact mentioned by David Doyle who said: “I would place a bet today that this will not happen again within the next 125 years!”

Other offices held by Fuller include a nine year spell on The British Hallmarking Council and a term as a Warden of The Assay Office Birmingham. He is also a past member of the Regional Council for the CBI, a Freeman of the City of London and a Liveryman of the Goldsmiths’ Company. Fuller, who is natural innovator, is also a great champion of design and adopter of new technologies and is often the first to spot a trend. He has done much over the years to advance the development of the industry at large giving freely of his help and advice, supporting a wide range of initiatives and nurturing new talent.

Speaking after the presentation Patrick Fuller said, “I was surprised and absolutely delighted to receive this Award. My success within the jewellery industry has been very much a joint effort with my wife Vivian and the excellent teams who have worked with us to build the companies within WB The Creative Jewellery Group. It has been a tremendous and exciting journey, which isn’t over yet.”