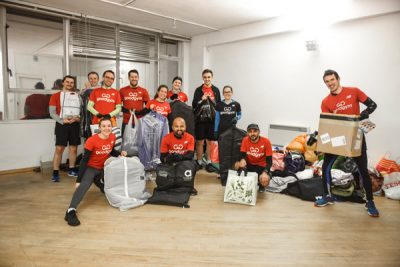 GoodGym Birmingham volunteers getting ready to set off from the Big Peg to Suited for Success with the donations. Photo Anne-Marie Hayes.

Battling the wind and rain, the JQBID was joined by volunteers from GoodGym Birmingham to transfer the donations across to Suited for Success – a charity that provides free suits and interview clothes to unemployed men and women.

Over 800 items of work clothing and accessories were donated from generous workplaces across the Jewellery Quarter including ties, shoes, handbags, three-piece suits and smart blouses and dresses.

Throughout the campaign these were dropped off at the Big Peg reception which acted as a central donation point in addition to providing free storage during the campaign.

After volunteers had loaded up with bags and suits the short half-mile walk from the Big Peg to Suited for Success was made rather difficult by the driving rain and ice-cold winds, but Patricia White was delighted to welcome the volunteers and receive the donations. 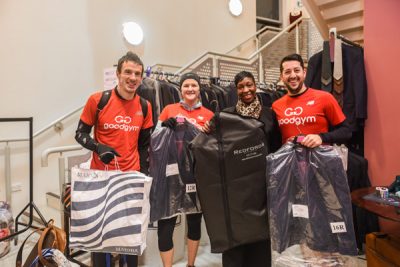 Patricia commented: “The donations raised will make a big difference to support the unemployed men and women we work with to succeed in a job interview, gain employment and change lives.”

This was the third JQ Suit Drive organised by the JQBID, and the second that involved volunteer help from GoodGym Birmingham. The total number of donations was more than four times what was received in 2018 when the last campaign was run.

Jonathan Carter, GoodGym Birmingham Run Leader said: “Suited for Success is one of our regular charities and we’re always happy to bring more donations to them. GoodGym is all about getting fit while doing good by helping the local community.

The work they do at Suited for Success is amazing, thank you to the Jewellery Quarter community for coming out to support them.” 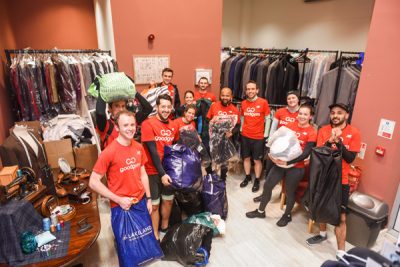