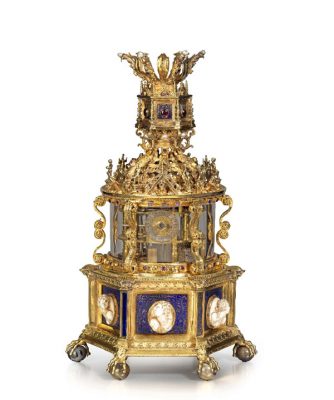 One of the greatest treasures of the Goldsmiths’ Company Collection, the Royal Clock Salt, on loan for display in the Waddesdon Bequest Gallery at the British Museum since February 2018, will now be on extended loan until February 2020. The loan was part of a research collaboration between the Goldsmiths’ Company, the British Museum, Waddesdon Manor and the Rothschild Foundation.

Following a successful international conference at Goldsmiths’ Hall in November 2018, the decision was taken to extend the loan to allow even more people to view this historic treasure.

Papers from the November 2018 conference are to be published as a British Museum Research Publication in 2021 and will shed light on the object’s history, its attribution and the modifications it has undergone. Probably a diplomatic gift from King Francis I of France to King Henry VIII of England, or between two of their courtiers, the Clock Salt was made in Paris around 1530-35 by the royal goldsmith, Pierre Mangot. As a display piece, it functioned both as a table clock and a salt cellar.

Mangot supplied luxury goods for the French court which incorporated precious and exotic materials, such as the Sibyls Casket in the Waddesdon Bequest.

The Casket and the Clock Salt can now be studied together, adding greatly to our understanding of both pieces, their makers and owners. A design by Hans Holbein the Younger shows a clock salt which was to be presented by Sir Anthony Denny to Henry VIII in 1545. Of the eleven clock salts listed in Henry’s collection after his death, only this one survives.

It reappears in inventories until it was sold from the Royal Collection after the Civil War in 1649. It is one of only four known surviving pieces from the several thousand items of goldsmiths’ work that once belonged to Henry VIII; another is the 14th century French Royal Gold Cup which is on display in the British Museum. The last time the Clock Salt left Goldsmiths’ Hall was for a loan to Tate Britain for ‘Holbein in England’ Sept 2006 – Jan 2007.

The extended loan will allow millions of visitors to the British Museum to see the Clock Salt for free and will also allow for further research towards the publication.