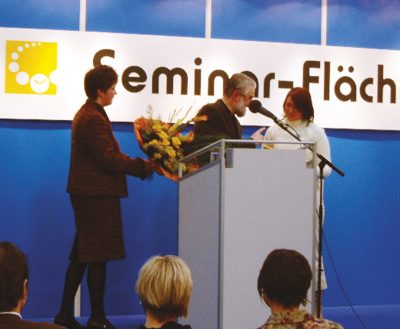 According to the official report, this year’s trade fair in Munich, which covers watches, clocks and precious stones as well as jewellery, benefited from 30,000 visitors; a similar number to last year.

This was encouraging for a depressed German economy though there was plenty to lift the spirits in Hall C2.

This hall featured Innovation and Creative Design and included a number of Europe’s major education and training centres.

The School of Jewellery was once again represented and the varied display of staff and student work created many favourable comments.

At this year’s fair four Innovation Awards were presented, three to professional German designer-makers and one to Tara Lees, who graduated from the School in June 2002.

The photo shows Tara being presented with her award by Wolf-Peter Schwarz of Ehinger-Schwarz. In addition to a certificate and enormous bouquet Tara also received a free stand at next year’s Inhorgenta show.

Graduate, Gill Galloway-Whitehead also had a busy fair; selling her work from a stand that was her prize for an Innovation Award in 2002.