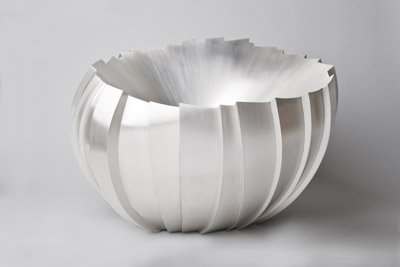 ‘Striking and original’ is how the Art Gallery of South Australia has summed up their new acquisition of ‘Serriform Silver’ by contemporary British silversmith Kevin Grey.

Robert Reason – Curator of European and Australian Decorative Arts at AGSA writes of Serriform silver; “It captures the materiality of silver beautifully, but also in an unexpected way through the precision of the form, bringing the organic and geometric together.

Serriform Silver will join works by Junko Mori, Hiroshi Suzuki and contemporary Australian silversmiths as I try and build a dynamic group that links current making with our historical collections.”

Grey says, “I’m very pleased to have one of my works in such a prestigious international public collection. Serriform Silver is a substantial work, comprising over 9kgs of sterling silver and being 480mm in Diameter.

Such a large form is possible due to Grey’s use of TIG (tungsten inert gas) welding, an industrial technique he has transferred to silver hollowware. Grey’s approach is innovative and unorthodox. The aesthetic presence and beauty of the silver is immediately palpable.”

Grey who in a relatively short time since graduating in 2007 from Birmingham’s School of Jewellery has attracted international attention. He is represented in the U.S. By Gallery Maison Gerard in New York and has also exhibited at the V&A, London.

His work is in a number of national and private collections. Grey has won numerous awards for his highly unique and original approach to silver including winning the Goldsmiths Company Award an impressive three times.