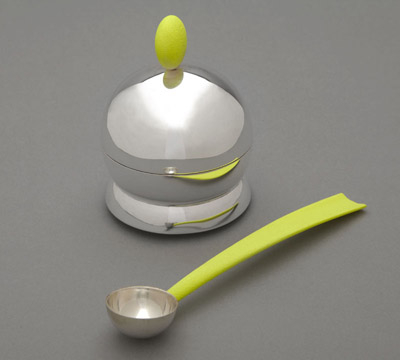 The Birmingham Assay Office is pleased to announce that up and coming designer Simon Pattison launched his first collection as part of the Birmingham School of Jewellery’s MA show, ‘Making Treasure’ on the 11th September.

Simon is an emerging talent and following a career working for some of the UK’s leading tableware manufactures he is now showcasing his design skills within this exciting exhibition.

On completing the MA, Simon successfully secured sponsorship from The Birmingham Assay Office in recognition for his design skills. Marie Brennan, Business Relations Manager, states, “Simon is a real emerging design talent and someone to watch.”

Simon’s abilities were further acknowledged with the Gil Packard Bursary from The Goldsmiths Company in 2009 and the Freud Open Design Competition in 2010.

Simon experiments in different materials to produce objects which are unique and engage with his target audience. Working in silver and bone china, along with rapid prototyped vessel forms, he is able to produce work which is challenging yet playful.

Pattison stated: “my work derives from an exploration of the relationship between form and function. I look to create functional objects for the home which challenge and excite the user with designs which are serious yet play on their relationships. I look for synergies between materials, processes, colours, and finishes, in different mediums including ceramics, metal, and wood.

I have used industrial processes to create some of the objects, whilst others have been developed using paper and card. When people interact with my work I want them to smile, to have fun with the objects, bringing joy to the relationship between object and user.”