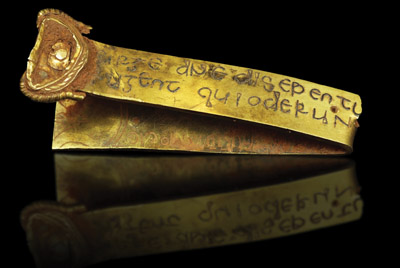 The Art Fund is delighted to announce that the Staffordshire Hoard, the largest archaeological Anglo-Saxon find ever unearthed, has been saved for the nation.

The news comes after the National Heritage Memorial Fund (NHMF), the government’s fund of last resort for heritage items at risk, pledged £1,285,000 – bringing the campaign to the £3.3m target, just over three weeks ahead of schedule.

Thanks to the support of the public, trusts and foundations, and the generous £1,285,000 NHMF grant, the awe-inspiring find has now been safely secured for Birmingham Museums & Art Gallery and the Potteries Museum & Art Gallery, Stoke-on-Trent.

On 13 January 2010 The Art Fund launched the campaign to save the Staffordshire Hoard on behalf of both acquiring museums with a £300,000 grant and with generous pledges of £100,000 each from Birmingham and Stoke City Councils. 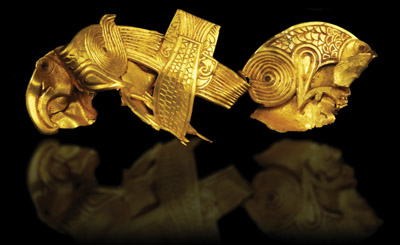 Stephen Deuchar, Director of The Art Fund, said: “We have been absolutely bowled over by the enthusiasm and fascination the Staffordshire Hoard has sparked amongst the British public, as well as visitors from abroad. It is wonderful news that the NHMF has enabled the target of £3.3m to be reached ahead of the deadline, and I hope that this will give the West Midlands a head-start with the next stage in fundraising for the conservation, research and display of the treasure.”

Dame Jenny Abramsky, Chair of NHMF, said: “We’re delighted to be able to announce this news today. The Staffordshire Hoard is an extraordinary heritage treasure. It is exactly the sort of thing the National Heritage Memorial Fund was set up to save, stepping in as the ‘fund of last resort’ when our national heritage is at risk, as a fitting memorial to those who have given their lives in the service of our nation.

We’re delighted, in our 30th anniversary year, to be able to make sure it stays just where it belongs, providing rare insights into one of the more mysterious periods of our history.” 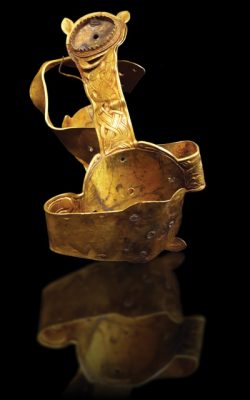 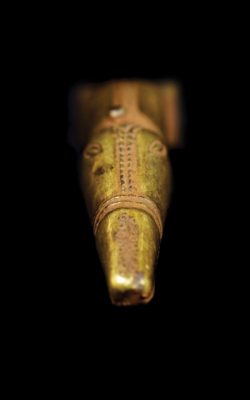 Eminent historian and broadcaster Dr David Starkey helped launch the campaign on 13 January, giving an illuminating speech on the value of the Hoard and coining the term “gangland bling” to describe its dazzling beauty and links to bloody warfare.

Today David Starkey commented: “This is wonderful news for historians worldwide – the Staffordshire Hoard provides us with vital clues to our ancient past, and now we can set about decoding them.

We’re delighted that The Art Fund, the NHMF, all other funding bodies and the generous public have helped us save these breathtaking treasures for posterity. It’s now vital that we think ahead towards a future conservation of the Hoard, and displays that will match the excitement of the find.”

Cllr Martin Mullaney, Cabinet Member for Leisure Sport and Culture for Birmingham City Council said: “It is great achievement to secure the hoard for the West Midlands Region. Not only have we managed to raise the necessary £3.3 million to return the hoard to its rightful home a month ahead of schedule but a staggering £900,000 of this has been raised by personal donations. I have been overwhelmed by the public response and can’t thank enough everyone who has given and supported our campaign in helping us bringing the Hoard home.”

Councillor Hazel Lyth, Stoke-on-Trent City Council, said: “This grant from the National Heritage Memorial Fund is the cherry on the cake of an extraordinary fundraising campaign which has highlighted how proud and determined the local community have been to keep the Staffordshire Hoard in the region. But this is great news for the whole country; we can now begin to unlock the secrets held within this amazing collection.” 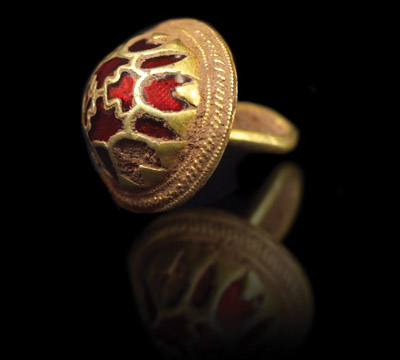 Since the launch of the campaign, over £900,000 has been raised through public donations. Over 100,000 people have visited the Staffordshire Hoard displays in Stoke-on-Trent, Birmingham and the British Museum. Donations from members of the public have ranged from £1 to £100,000, and have come in from as far afield as the USA and Japan. In addition to public support, the campaign has received substantial donations from trusts and foundations.

However, The Art Fund emphasised today that there is still more work to be done. A further £1.7m must be found so that the Hoard can be properly conserved, studied and displayed. Plans for the future conservation and interpretation of the Hoard include the creation of a ‘Mercian Trail’ which would highlight the fascinating history of Mercia, the Anglo-Saxon kingdom which covered the West Midlands area. The Hoard was found in July 2009 in a field near Lichfield, which already contains two other Anglo-Saxon treasures: the illuminated St Chad Gospels, and a stone angel.

Watling Street, the famous Roman road now known as the A5, runs close by to where the Hoard lay buried for thousands of years.
Experts believe that the 1,500 pieces of Anglo-Saxon gold contain many secrets about the ‘Dark Ages’, and there has already been much debate about the exact date at which it was buried.

The Hoard also shifts the focus of Anglo-Saxon history from East to West. Previously, the most important treasure from the period was the Sutton Hoo burial ship, uncovered in Suffolk in 1939. Whilst experts believed that there would be immense wealth in Mercia, they had never found sufficient concrete evidence, until now. It could take decades to unlock all the secrets.

The further £1.7m will also facilitate the future loan of items from the Hoard to key historic venues such as Tamworth Castle and Lichfield Cathedral – both important Mercian sites.

The Staffordshire Hoard contains over 1,500 finely crafted objects, mostly gold and some inlaid with precious stones. It was unearthed in July 2009 by a metal detectorist in a field near Lichfield, and was declared Treasure on 24 September 2009. The two West Midlands museums jointly bid to acquire the Hoard on 25 November and were given until 17 April 2010 to secure it.

Exhibitions of the Hoard in Stoke-on-Trent, Birmingham and the British Museum have drawn visitors from near and far. One enthusiast from South Carolina travelled 3,000 miles to see the displays at the Potteries Museum & Art Gallery, whilst a 101 year-old antiques fan from Barlaston was recorded as the oldest person to visit the same exhibition. The Art Fund also received a touching letter from one nine-year-old girl from Devon, who pledged £10 from her own piggy bank to help “save the treasure,” and organised a special visit for her to see the Hoard displays.

The campaign has also attracted the support of various celebrities along the way, including Dame Judi Dench, Tony Robinson, Frank Skinner, Bill Wyman, Dr Tristram Hunt, and Michael Palin. The leaders of all three political parties have endorsed the campaign, alongside Rt Hon Margaret Hodge MP, Minister for Culture and Tourism.

All further donations received will be directed to the £1.7m campaign for conservation and research. The public can continue to donate to the wider campaign via www.artfund.org/hoard.