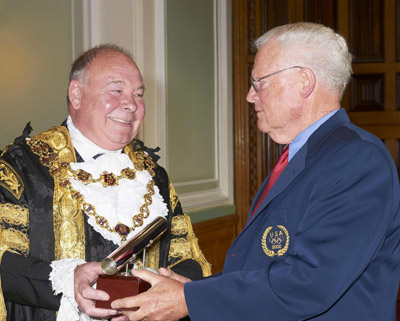 The Lord Mayor of Birmingham, Cllr John Lines handing over the silver baton to a senior representative from the USA Olympic track and field team

Olympic fever has gripped the UK this week and Birmingham is no exception as it plays host to the USA and Jamaican track and field squads.

Some of the hottest favourites for Gold in 2012 are preparing for the Games right here in the Midlands and excitement is mounting across the City.

The Birmingham Assay Office were honoured to contribute to an Olympian team effort when they were asked to laser mark two ceremonial sterling silver batons to be presented to each of the teams.

Steve Millington, of L. J. Millington, one of the Birmingham Jewellery Quarter’s long established family owned silver-smithing companies was commissioned by Birmingham City Council to produce two very special civic gifts based on a similar baton the company had displayed earlier in the year at the “Made in the Jewellery Quarter exhibition,” at Artful Expression in Warstone Lane. 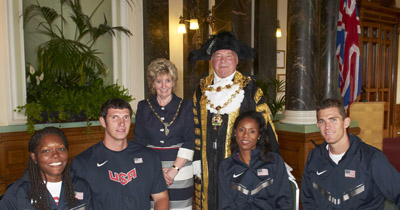 The Lord Mayor and Lady Mayoress of Birmingham, Cllr John Lines and Kathleen Lines with members of the USA Olympic track and field team

In record breaking time, L. J. Millington was able to link up with Argex, based in Hockley Hill, who supplied the silver.

Steve then worked very closely with senior laser marker Suki Singh at The Birmingham Assay Office who created the precise and detailed artwork to mark the batons with the flags of each country, the Union Jack and Birmingham 2012 on one side and all the separate hallmarks including the unique queen’s diamond jubilee commemorative mark on the other side. The batons themselves are 38mm in diameter, 280mm in length and contain 344gms of silver. 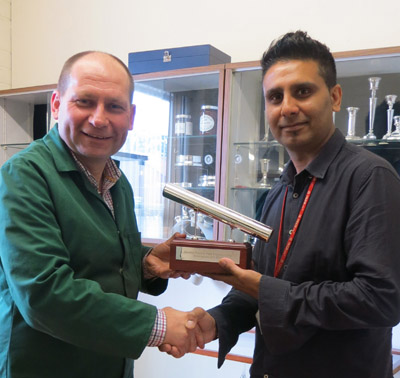 Suki, pictured with Steve Millington and the finished, mounted silver batons said, “This is a really historic moment for Birmingham and it is great to be part of it.

Laser marking the batons as well as the silver plaques which are mounted on oak plinths was a challenge and there is absolutely no room for error but I am very pleased with the result and both teams have really appreciated the workmanship involved”.

James Wrighton (est. 1860), based in Steward Street were the last leg of the Team Birmingham relay. They supplied the special oak plinths and Steve then created bespoke silver cradles to safely house the silver batons.

Steve Millington commented: “It really was a team effort with every Birmingham based company playing its part to complete these unique items on time. I would like to thank everyone involved and am pleased and proud of the quality and workmanship that we have all achieved.”

The Lord Mayor of Birmingham, Cllr John Lines, said, “This is a great moment; to be able to hand over precious metal batons that have been crafted in Birmingham fills me with pride. As a city we are able to play host to two training camps for some of the greatest athletes in the world, and now we’re able to hand them world-class workmanship from our city’s world famous Jewellery Quarter.” 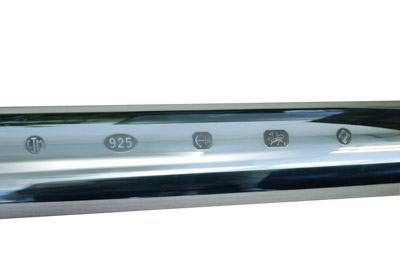 The final word goes to Michael Allchin Chief Executive and Assay Master who said, “It is great to have world class athletes in Birmingham and very fitting that the City should mark their visit here with such an appropriate gift.

The batons recognise their fantastic athletic achievements with a beautiful contemporary product made by one of Birmingham’s longest surviving industries, and marked at an Assay Office with innovative 21st century technology. We just hope that by giving the USA and Jamaica heavy silver batons to run with, there will be a Gold for Team GB!