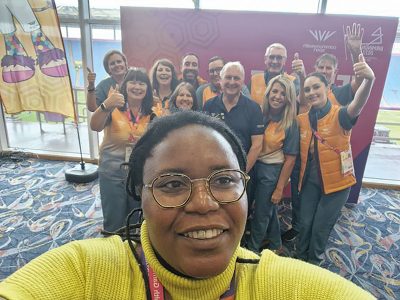 Known as the Commonwealth Collective, the army of volunteers in their distinctive orange and grey uniforms have become a familiar and very popular sight at Games venues and across the city over the last ten days.
And, as visitors from across the UK and the wider Commonwealth have flooded into Birmingham and the West Midlands, they have all been guaranteed a warm welcome, thanks in no small part to the volunteers with a range of duties including kit carriers, drivers, first aiders and greeters.

Cllr Ward said: “The volunteers have been fantastic ambassadors for the Birmingham Commonwealth Games, and I can’t thank them enough for the brilliant way they have welcomed athletes, officials and spectators to this city region.

“The 2022 Commonwealth Games is the biggest event Birmingham has ever staged and will be talked about for many years to come, so the volunteers will forever have a proud and richly deserved place in our city’s history.
“I said before the Games that the Commonwealth Games, traditionally known as the friendly games, would never come to a friendlier city. That is proving to be true and much of the credit should go to the smiling, welcoming and ever-helpful volunteers. I’ve lost count of the number of times people have told me just how great the volunteers are, and I agree – 100 per cent. They’ve been amazing.”

In addition to homegrown volunteers, the Commonwealth Collective includes people from Australia, New Zealand, India, and even non-Commonwealth nation Finland.

Cllr Ward added: “As far as I’m concerned, they’re all honorary Brummies. They’ve done themselves, the city of Birmingham and the Commonwealth Games proud.”