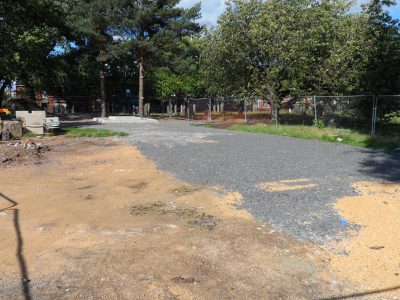 Warstone Lane Cemetery Chapel Footprint site:
A notice on the unfinished section of Warstone Lane cemetery reads, ‘Chapel Footprint Works, Garden of Memory – working area do not enter’. ‘This is because the completion of this area is slightly delayed. This work in on-going and will be complete during Autumn 2020. We are waiting for delivery of the new stone monument which will form the focus of this area. This item is coming from abroad and has been held up due to the Corona Virus Pandemic. The works are expected to be complete by the end of the year. 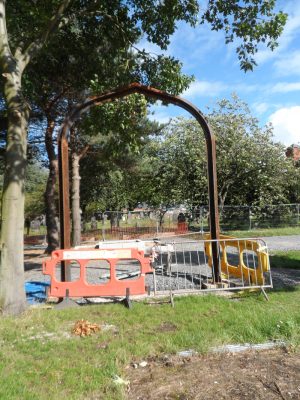 A JQ Cemetery spokesperson said, “The dimensions of the memorial stone are not a standard size, sadly no British quarry was able to accommodate the order. There will be a plaque on the stone with an engraving of the chapel.

The plaque is being made in the Midlands by A. E. Harris.” (founded in the JQ) – now based at West Bromwich.

Drainage
During the heavy rain recently, observers noted the drains were full of the loose material from the new paths. A JQ Cemetery spokesperson said, “The paths haven’t had the loose material swept off them yet, because they have to be laid for 3-4 weeks before that can be done.

The contractors will be doing the second compaction with the rollers, then sweeping them and clearing the drains before the end of the contract. After that there won’t be any loose material to run off!” 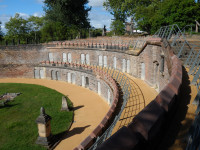 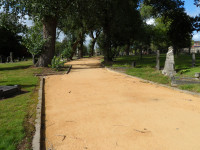 Some years ago, when Colin Giles was making great efforts to clear the pathways, he came across an item which, although in a bad state of repair, was obviously a Sundial.

This has been removed for the time being with a view to restoration.

In the meantime, enjoy the open spaces of the cemetery but please take care when moving around, some surfaces are temporary and uneven.

Also note you should stick to the footpaths.