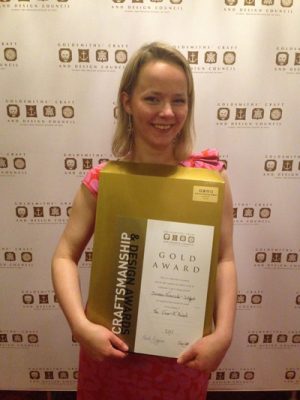 Joanna Fronczak-Jabbal, a CAD Designer at the Birmingham casting house and 3D printing company, Weston Beamor, has won the coveted ‘Gem-A Gold Award’ (the Gemmological Association of Great Britain) at the ‘Goldsmiths Craft and Design Council Awards’ for the second year running. The Awards took place at Goldsmiths’ Hall in London at the beginning of March.

Joanna, who is a graduate of The Jewellery School at Birmingham City University and has been working for Weston Beamor for the past 18 months, caught the judge’s eye with her dainty and sophisticated ‘Opulence’ earrings, which were inspired by orchid flowers.

Joanna entered the drawing of her the earrings and also the actual earrings, which she made herself in silver and rubies using Weston Beamor’s 3D printing and casting facilities, to the competition.

Her prize includes a week-long course at Gem-A’s London headquarters.

“I am so excited to have won this prize for the second time. Last year I managed to gain a certificate in Diamond Grading and Identification, which I found fascinating and this year I am hoping to be able to go on to the next stage and undertake a Diamond Grading Diploma,” Joanna commented.

Speaking for Weston Beamor, Business Manager Glen Day said, “We are hugely proud of Jo’s achievement. We have long recognized her design talent but it is gratifying to have this acknowledged by such prestigious bodies as the Goldsmiths’ Craft & Design Council and Gem-A.”