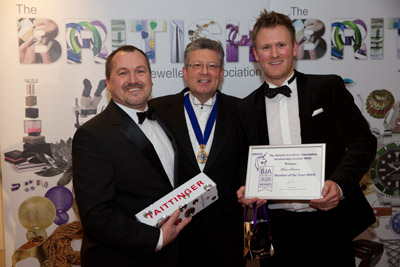 Weston Beamor, the Birmingham casting house and 3D printing specialist, was awarded the title ‘BJA Member of the Year’ at the British Jewellers’ Association’s Awards which took place at the St. Johns Hotel in Solihull on 5th December.

This category of the Awards is for businesses that have contributed most to the work of the Association and the industry at large over the past year.

Speaking at the ceremony, BJA chief executive Simon Rainer, praised Weston Beamor for the huge contribution it had made, at the end of 2012, to the production of The BJA’s 125th Anniversary brooch, a gift for the Queen to celebrate her diamond jubilee, saying that the company had alongside others in the industry ‘given freely of its time and expertise’ to help produce the piece.

Rainer also praised Weston Beamor’s on-going commitment to training the next generation of jewellers, mentioning its intake of interns, involvement in apprenticeship schemes and its support of jewellery colleges and universities.

Speaking after the ceremony, Glen Day, head of business development at the company said: “We are absolutely delighted to have won this Award and it is particularly gratifying that we were selected by votes from the industry at large, so huge thanks to the many people who supported us.

Links between Weston Beamor and The BJA are close and extremely long-standing going back to when this company was formed in 1947. We value the work of the Association and look forward to collaborating with them further in years to come.”